First impressions after the Assembl demonstration

We (@Ruxandra & @Noemi) just had this morning a call with Laura Gillies from Imagination for People that talked us through the Assembl software, mainly to understand how Edgeryders people can use it.

Can it work for us?

Laura says that Assembl is a tool that allows an organized discussion with a great number of participants (from minimum a couple hundreds to several thousands). The tool lives on their own server and was designed for ongoing, in-depth discussions which would be stimulated by the publishing of constant syntheses. There is no possibility today to import already existing discussions from other platforms, like we thought of doing with #Lote4 Stewardship discussions. Plus, any one of us involved in a conversation in Assembl would need to register there, via Facebook, Twitter, google or with an email address.

The advantage of using Assembl instead of usual forums is the way they thought about the community management and facilitation functionalities.

There are the “harvesters” that create “table of contents” and thus structure the whole discussion in different threads. 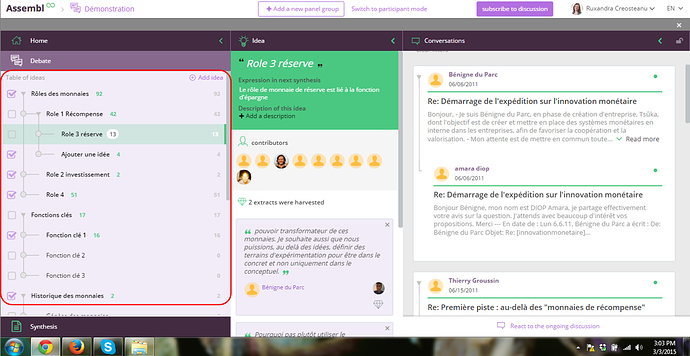 The harvesters can highlight part of the comments of the people, that would appear in the idea summary, so that people can quickly overview the content and understand what the whole discussion is about and intervene. 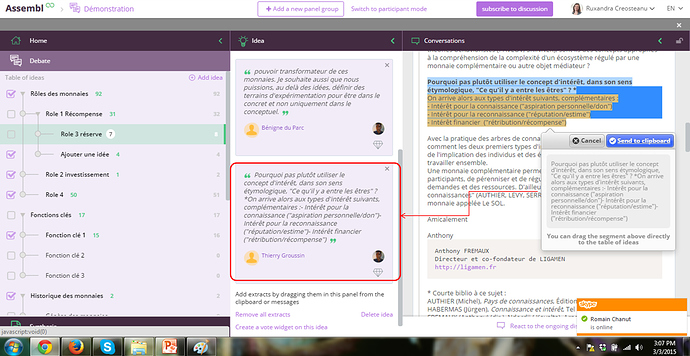 The synthetizers manually create a synthesis of the highlighted comments for each part of the table of contents that make sense. That way, anyone new coming into the conversation can easily browse the contents. 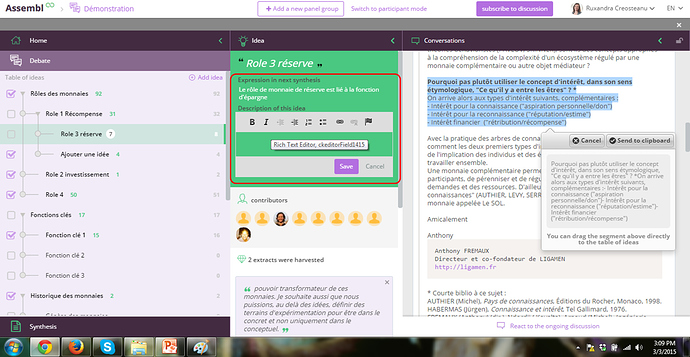 We are now thinking to create a workshop where either somebody from Imagination for people presents the tool, either I am presenting the tool to the Edgeryders community that is interested in knowing more about Assembl. @fjanss

We are still waiting for the answer from Laura regarding creating a space on Assembl where to test the tool live. As their sandbox isn’t currently public on the web, that application will be.

At a minimum, we can host the workshop, have a couple of us test functionalities of the application, and look at what, if any, community conversations now or in the future can benefit from using it.

Any other ideas on how you see yourself involved with Assembl? Perhaps you want to initiate a conversation there that would happen over months and involve hundreds?

Added some of my notes

Thanks for posting, earlier today I wasn’t pleased to learn that we can’t talk any integration with Edgeryders so far, for objective reasons. I was hoping we could join without having to register on yet another platform…  or worse, ask others to do that (mainly because people around here are not fans of a lot of platforms, and onboarding & engagement take months…). Hopefully we’ll find a way to route through that

For my proposal/purposes it does not matter where  Assembl is hosted, for the moment. And I would start a discussion from scratch.

But I assumed it was “libre software”. Is it really ? assembl.org is down for the moment, so I cannot check. So far it does not give much of an appearance of “openness”, some clarification would be welcome.

Yep the software is open source - you can take a look at all the code here: https://github.com/ImaginationForPeople/assembl

We’re in the process of adding a section to the site for our open source community.

Each individual debate is closed, however. Users must create an account in order to contribute. This is to cut down on spam, and to ensure a base level of quality to the discussion. That being said, if users are already part of a mailing list, or are discussing on a platform for which interoperability has been developed they can contribute to the discussion without creating or logging on to Assembl itself. They will receive syntheses and message notifications via email or the platform they were using before. We are slowly building up the number of platforms that are interoperable to help with  migration!

Hmm. I agree with Noemi. I don’t think is realistic or desirable to push ER users to yet another platform. Plus, we can only steward conversation if they live on our server. By the way: I think this is enough of a recurring issue that I am assigning this thread to the LOTE4 Stewardship group as well as the CATALYST group.

Laura, even if users wanted to use other platforms (which they generally don’t – everyone complains about fragmentation etc.), we would be very reluctant to see them having Edgeryders-relevant debates elsewhere. It takes hard work to onboard them. With all due respect, I think Assembl’s value proposition rest strongly on the fact that it is completely transparent to “normal” users, and requires them no additional effort so they can concentrate on the conversation. So no batch import of users is going to happen from Edgeryders. We are talking content.

Hi everyone, we created a discussion on Assembl for Edgeryders the link is here: http://discussions.bluenove.com/edgeryders/.

I have started to copy some of the conclusions of the Lote4 discussions, just to test the tool.

I have the impression:

As an admin, I would have loved to be able to reorganize the order of the comments, in order to create a coherent story.

Will keep you posted.

Will this be saved or is it just a temporary test ?

Just to know if I try to make sensible posts or just fast dummy arguments.

Does not work with dummies

@fjanss, your question is more difficult than it seems.

So, what to do? I am afraid the only solution “done right” that can be done is to post on Edgeryders instead. Then, your post/comment will be manually imported over to the Assembl server and processed there into a summary. If your content is on Edgeryders, we do take responsibility for it, and we are sure to keep the conversation about stewardship going as long as we exist.

I will create an Edgeryders project

After having a good look at the Assembl sandbox version

So I will create an Edgeryders project. Invisible at the start, so I can try to find the best fit between the structure of my “text” and the tools offered by Edgeryders, and open it when I feel it has the minimal functionality for the sort of interaction I aim for.

Happy you found a solution

Sounds intriguing and look forward to the conversation. Don’t hesitate to ask around whatever doubts or questions you may come across…

I could add some about engagement to build any conversation involving community members or new people coming into Edgeryders, but that could be outside the scope of your current decision. I wrote something about engagement in the Stewardship discussion that might help though… depending of the scale of your discussion.

Thanks for the support.

As I indicated in start discussion, and representation , I will start the conversation in french with people who know me, and thus will come from outside Edgeryders. That will be my testbed, because I will have an ‘out of channel’ feedback. If/when that leads to a working pattern, I will start translating in english, and invite people I know by having read them, but who mostly do not know me, as well as be more accessible for the present Edgeryders community.

About engagement : I am retired; in a certain sense this is my full time job since some years, it is ‘just’ the transition from private to public activity.

@fjanss, did I understand correctly that dummy posts can’t be deleted? In this case I would not make fast dummy arguments, as @Alberto is saying, we do not want to test just the functionalities, but more the value creation through the harvesting.

No dummies and no pretending

So after personally having met others from the team these days, it seems they would (tentatively) be willing to work on importing the content because they are interested in Drupal integration anyway. This means we stay on Edgeryders, but the content will also be hosted there. The question is: can/should we take responsibility that if they take the time to work on this, we will be having a proper synthesis in Assembl that would find its way back to the community, which, as Alberto is sayingm is the true testing.

Rux, it is probably better to not mess around too much with the current installation until we have a solid plan, because apparently it takes work to restore it… for functionality testing we can use the sandbox version which is open to all.

You’re back from Rome? How was it? Yes, it makes much more sens to import the whole content and then make the synthesis. If that’s the idea, then I can leave the synthesis for after the Drupal integration, no problem.

@Ruxandra, I can’t see anything at that link. I don’t get a 404 or anything, just a light blue page with nothing on it

It works from me, have even tried from different browsers and machines…