Highlights from Ellen MacArthur's The Big Food: cities as the core of transformation

Hi all, after the session on Community support for food projects I spent quite some time reading up on new things. I relay here some things I learned from a web series hosted a few weeks ago by the Ellen MarArthur Foundation - a global charity supporting the acceleration to a circular economy.

‘The covid19 crisis has shown us we have a greater need than ever to create a distributed, diverse and regenerative food system’

In the current linear economy, our food system is extractive and damaging to the environment by endless depletion. The Foundation calculated that for every 1 dollar that we spend on food, there’s an equivalent of 2 dollars of negative environmental and health impacts, tied to the way we produce and consume food: air quality, antimicrobial resistance, health impact to farmers, and obesity, malnutrition effects on consumers.

Perhaps more than any other units, cities are key players for transformation: 68% of the world’s population will live in them by 2050, consuming 80% of the world’s food. Cities have evolved to work with high distance supply chains. Colonization and the discovery of corn and sugar brought about food systems that are translocal, with severe transformations of the countrysides from suppliers of the city into a marginal economic source.

The urban paradox: we like to talk about ourselves as urban, but we need resources that live in the natural world, which means that the urban identity is only a context we have created, whereas we’ve forgotten about our real source of life and how good governance, the responsibility of feeding people needs to take into account the real landscape in which we exist - urban and rural. In addition, carbon zero lifestyles means people need to have access to the rural economy as much as the urban economy.

How do you maximize the urban/rural interface?

I found it interesting that ‘the close proximity of citizens, retailers, and service providers (40% of cropland is within 20km of cities) makes new circuits possible.’ For food businesses, this means to use regenerative practices for cultivating animal or vegetable products; source, design, market as much healthy, local and seasonal food as possible, and avoid waste.

The role of chefs, food designers and food service companies in the transition to a circular economy

Restaurants and food services in particular influence what people eat, especially given that people are eating out more and more (90% of people in some Asian countries eat out every day!). So they have a lot of capacity for transformation. What’s more, the tendency (in high cuisine I think!) is for chefs to become micro-regional chefs, rediscovering and connecting back to ancient foods and recipes. Fermentation is a good example of knowledge that has been distilled by generations, yet it is only now becoming trendy.

The practices presented were:

Some project ideas which now make the rounds of what constitutes circular food:

A final section of the series was dedicated to regenerative practices and how we could be using urban organic wasteflows for production purposes after. I skipped it, but the video is here, if anyone is interested.

This all seems too good - I was disappointed to see that challenges to make this transition were not discussed… and we sure know there are many, including for the very survival of good food entrepreneurs and projects!

If any of these is relevant to you, I’d be curious to learn how are you involved in your city transformation? Are you a fan of the circular economy? Are you struggling to recover after #covid19? Let’s talk!

In the USA one kind of business is thriving: plant nurseries. Home gardening has exploded over here. Even to my house…(never had a garden before, now I do). 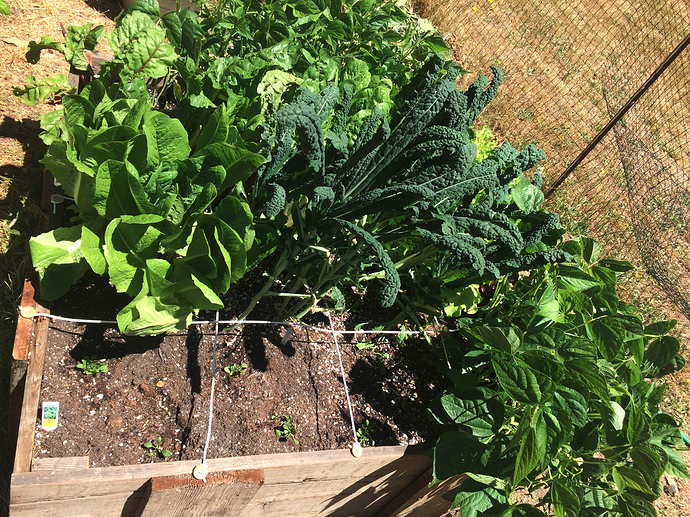 I believe this is the case with my house (just more plants, if not gardening) and my friends both in Brussels and Romania reporting the same: these are busy, career oriented 30 year olds, mind you

which makes it all the more telling.

I cannot recall when I have eaten so much salad…

I have been eating organic produce almost exclusively for the past several years. I live in northern California where amazing produce is abundant in the grocery stores. I never felt a need to have my own garden to grow food because of that.

But then with the lockdown I figured I had better limit my trips to the store so I started growing my own. And for sure I am getting a lot of food out of it. I’m not kidding about eating a lot of salad.

But what I did not expect is the deep, visceral feeling I get from caring for these plants that give me sustenance. My garden is nothing special compared to most - just a 4x4 foot box full of dirt plus a bunch of pots I had laying around. But more and more I find myself wanting to go there and just do whatever to tend the plants. I don’t have a dog or a cat. But when I was away over the long weekend that just past I had some anxiety about getting home so I could care for my garden. I feel actual affection for it. This I did not expect. But it is my version of what I think others also seek and are experiencing in this unprecedented time: a deeper, more personal connection to the basic stuff of life.

@manuelpueyo said to me a few week ago that being around a garden and caring for plants is therapeutic. I agree…!

Back when I was traveling a lot having a garden didn’t make good sense. But now I am here most of the time so things are different. I was away for a week not long ago which I why I expressed this new feeling that I need to get back to water before my garden dries out…it will be tested again in August a couple of times…