In Masters of Networks: Ethnography a group of ethnographers and networks scientists gathered to make collective sense of the opencare dataset. We worked in groups, each group exploring an approach to apply network and data science to the ethnographic data.

Data are documented here. The repo for Masters of Networks: Ethnography is here. The groups were as follows:

In what follows I document what we did in my group.

In the co-occurrences graph (or tag-tag network) two ethnographic tags are connected to each other if they co-occur in the same piece of content. In opencare at the time of Masters of Networks 5 (late November 2016) there were about 2,500 annotations involving 587 tags. The complete co-occurrences graph is very dense (~ 7,500 edges) and unreadable. The full conversation includes 324 posts, 1,470 comments for a total of 360,000 words.

We set out to do two things:

The co-occurrences graph as a gateway for exploring the conversation

We used the ego network as our main tool of exploration: 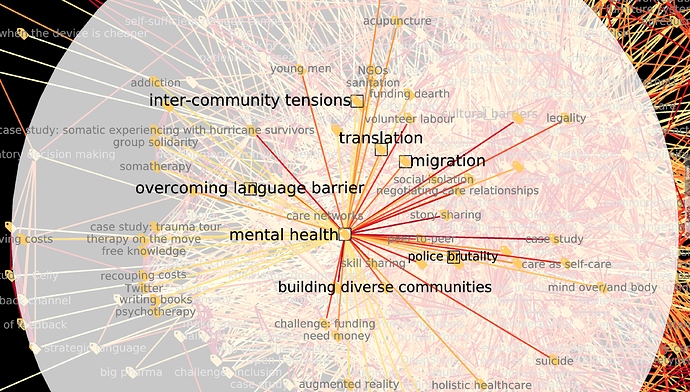 We agreed that this is a generative method. However, there is a difficulty: the unfiltered co-occurrences is too dense to explore. So, we explored instead filtered versions of the same. At the same time, when isolating an ego network it makes sense to re-surface all connections centered on the ego tag, including those who get filtered out.

We also agreed that this way of exploring is incomplete without the possility to “drill down” to reading the post(s)/comment(s) behind the most interesting co-occurrence edges. It generates questions ("Why are people making the connection between “mental health” and “translation”?), and reading what actually people were saying when they made that connection provides answers and further insights. Fortunately, this is what the Bordeaux group is already coding.

The graph reduced for n >= 4 yields the clearest results for our data: 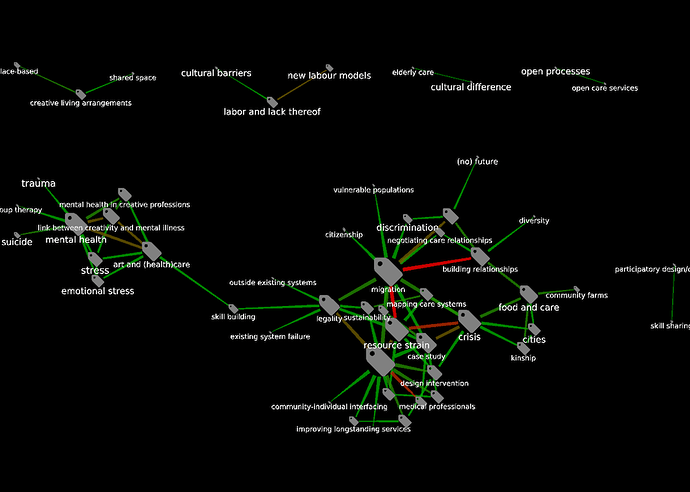 There is clear structure in this graph. There are smaller connected components with two or three tags each; and a giant component. The latter is itself highly structured. There is a “mainland” to the west, where the most frequent co-occurrences are migration-building relationships, migration-resource strain, resource strain-crisis and community based care-distributing care burden. A “peninsula” to the west, formed of tags clustered around mental health, connects to the mainland only through one single tag, skill sharing. We can hazard several tentative conclusions, such us:

What do you think? Do you see what we are seeing? Does the graph talk to you? Networks lovers, we would love to hear from you!

1 Like
How do we interpret the Degree of interest graphs?
New functionalities for the dashboard -- step by step discovery
noemi July 31, 2017, 6:38pm #2

I very much enjoyed the day and hoping I could make myself useful somehow.

Knowing very well where the data comes from and almost the exact posts, I would say migration and community care systems - whether relationships, distributing burden etc - is of great interest.

Mental health on the other hand has been popping up a lot, but its co-occurence with stress, trauma doesn’t feel surprising at all. The one area we it has been contextualized is in creativity/art and here we had a discussion with @Amelia about considering more explanatory tags for nuanced meanings - e.g. difference between “mental health in creative professions”, “link between creativity and mental health”? I think there is more to come from this topic in terms of surprising connections to areas of life, so that we are able to advance your statement 3 “Mental health and stress are a major concern for this community because…”

But this is me speaking from pov of a community manager.

I think that extension would be very enlightening. If we can add that ‘because’ to the conversation then we can start to understand how a broad topic like mental health and resilience (which affects many people across many countries/professions/networks) is most highlighted amongst the ER network.

I feel like we have heard a few stories about how people approach the subject, and how they allieviate the symptoms or problems. But i wonder if there are more ‘good news’ stories out there that can feed into this area. For now it mostly seems to be a discussion of/ exploration of the problem.

Remember: ethnography is not meant to find causal relationship. It’s meant to infer the world view of the informants. 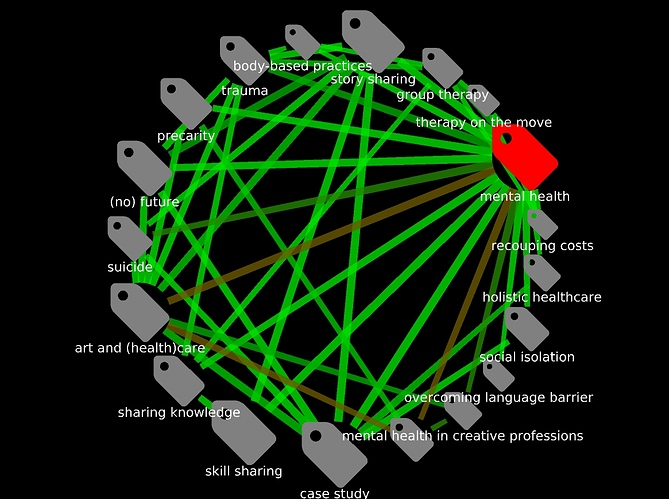 A couple of initial responses

Interesting to see that Social Isolation is only connected to Mental Health and not also linked to the more negative tags in the top right (suicide, precarity, lack of future etc) Supposition: Lack of social networks cause some mental health issues amongst ER members, but not to the same extent as lack of clear vision/individual drive.

If you remove the tags i associate with catagorisation (Case Study, Story sharing, Skill sharing) then my gut feeling above appears correct. The majority of tags are to do with the symptons or reasons for mental heath issues. Only 4 tags are to do with solutions or methods of dealing with the problem (Body based practices, group therapy, therapy on the move, holistic healthcare) Supposition: When talking about mental health ER members are happy to share personal experiences and talk about their feelings, but fewer of us are aware of, or suggesting methods to overcome these issues.

I’m a bit new to this process of ethnography, feel free to challenge what i’ve suggested above if it is too casual.

I am no ethnographer myself, @Alex_Levene , but yours looks like a reasonable analysis. It would be interesting to fully learn from @Amelia what constitutes evidence in ethnography, and how insights such as yours are validated.

@Jason_Vallet has built a navigable dashboard of the opencare conversation. Starting from the co-occurrences graph (he calls it the tag-tag network) you can click on any edge (for example “mental health” and “social isolation” and access and read the posts and comments that have been tagged with  both these codes. You can find it here: http://164.132.58.138:9000/ but at the moment it appears to be down, hopefully it will be restored quickly.