New to the game, so not sure if such a category already exists, but I thought it might provide useful to have a place where we can all share papers, reports, podcasts, OSINT etc. revolving around populism in Europe. I’ll start State of Hate 2021: Far-Right Extremism in Europe covers the state of the far-right across the continent, and what can be done to counter this threat. 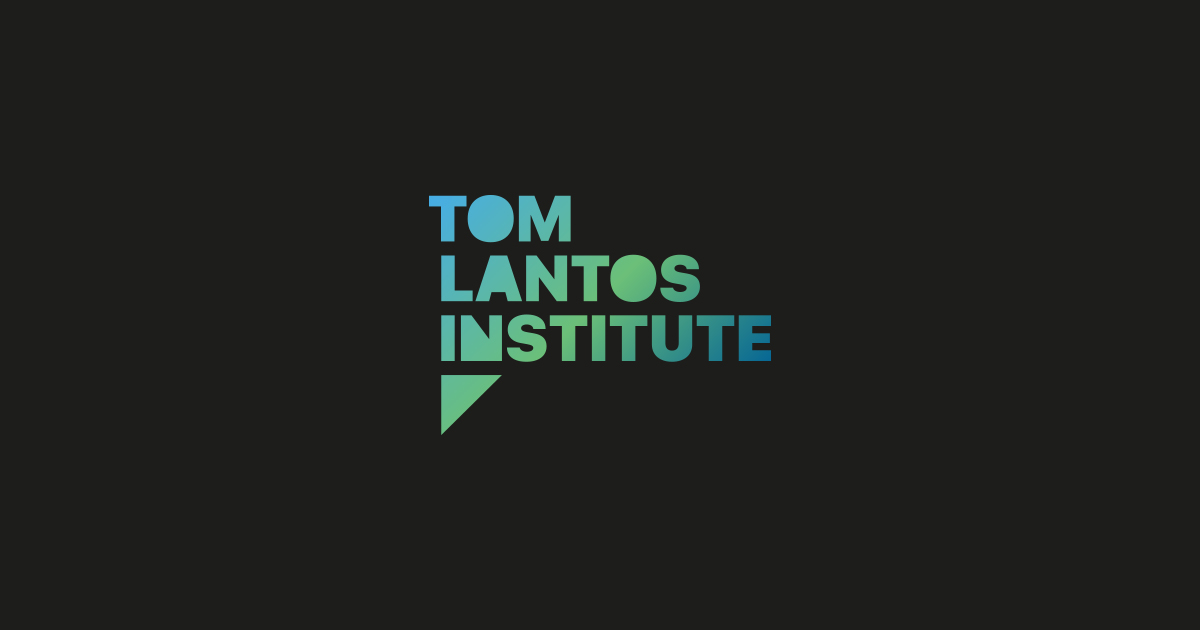 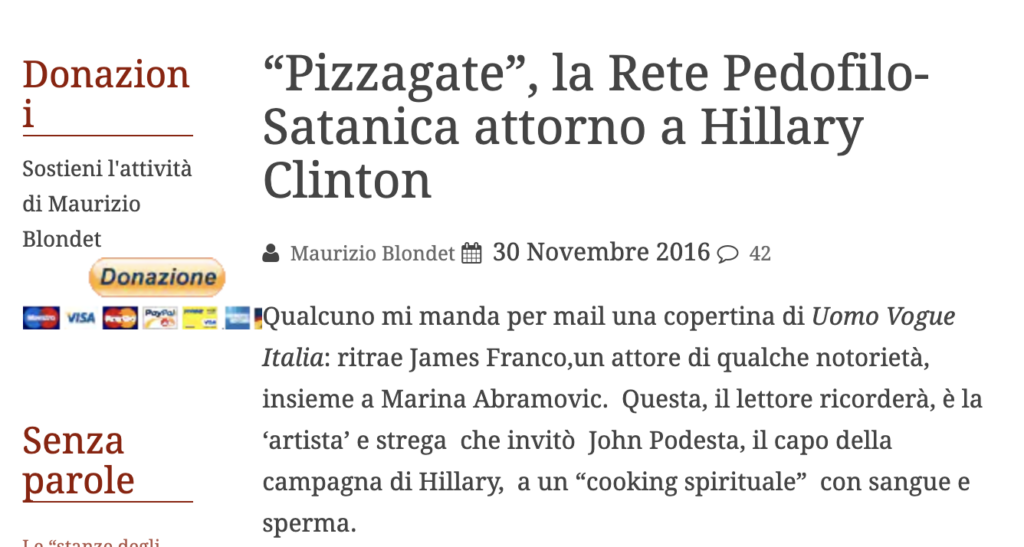 QAnon’s Deep State conspiracies spread to Europe By Chine Labbe, Virginia Padovese, Marie Richter and Anna-Sophie Harling QAnon started in the US in October 2017 with posts by an anonymous 4Chan user known as Q. Q ⁠— who soon amassed thousands of... 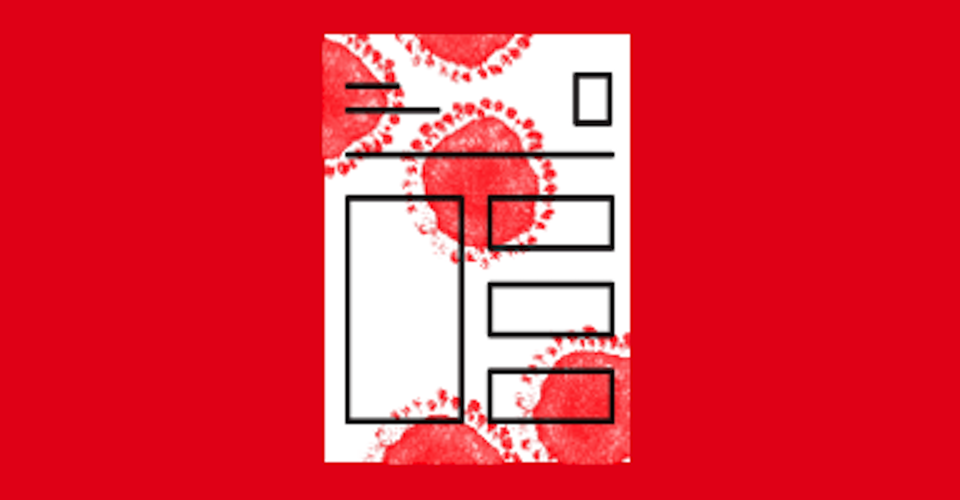 The Atlantic Daily: QAnon Is a New American Religion

That and more in our new project Shadowland.

I made this a Wiki, so now instead of commenting, we can add resources to @Djan’s original post!

Thanks for starting this @Djan

QAnon spreading Conspiracy Theories on Twitter (Disclaimer: I think the term conspiracy theory is unfortunate and misguiding, I think one should use conspiracy myths or narratives)

The Prophecies of Q

Opinion: QAnon is an American invention, but it has become a global plague

Have Faith and Question Everything: Exploring One Year of QAnon Posts

(PDF) The QAnon superconspiracy - Analysis of tweets during the 2020 US...

PDF | In October to November 2020, we analysed about half a million Twitter messages related to ‘QAnon’ conspiracy theories. These theories have roots... | Find, read and cite all the research you need on ResearchGate

The Gospel According to Q: Understanding the QAnon Conspiracy
from the Perspective of Canonical Information

A good resource for tracking the dissemination of (mostly Kremlin-backed) disinfo:

@Djan many thanks for all of this. As soon as I find a moment, I will study these materials and add stuff from my collection. I am not sure if you had time to check out our Publications and Working Papers on the POPREBEL site. For example in the Manifesto I wrote (Working Paper 1), there is an extensive bibliography. It is a bit old now, but I never have time to update it. I am also working with Aga Pasieka, who is an anthropologist working on far right movements. I am attaching her piece that I really like @amelia - I am not sure I mentioned this to you): PASIEKA-2019-Anthropology_Today.pdf (1.1 MB) .

@Jan thanks for attaching Pasieka’s piece! I have only had time to browse through some publications on the POPREBEL sight so far, but will add it to the reading list

For anyone interested i the origins and evolution of transgressionist alt-right online movements, Nagle’s book “Kill All Normies: Online Culture Wars From 4Chan And Tumblr To Trump And The Alt-Right” is a MUST read. (Also rather short, so no excuses

Many fascinating aspects in this one. Not only how mostly young men have created an ecosystem where the unacceptable is made acceptable, but also how strategies/methods from the left have been coopted/adopted.

But since everyone is busy etc:

an interview with the Economist which covers her basic concepts/ideas: 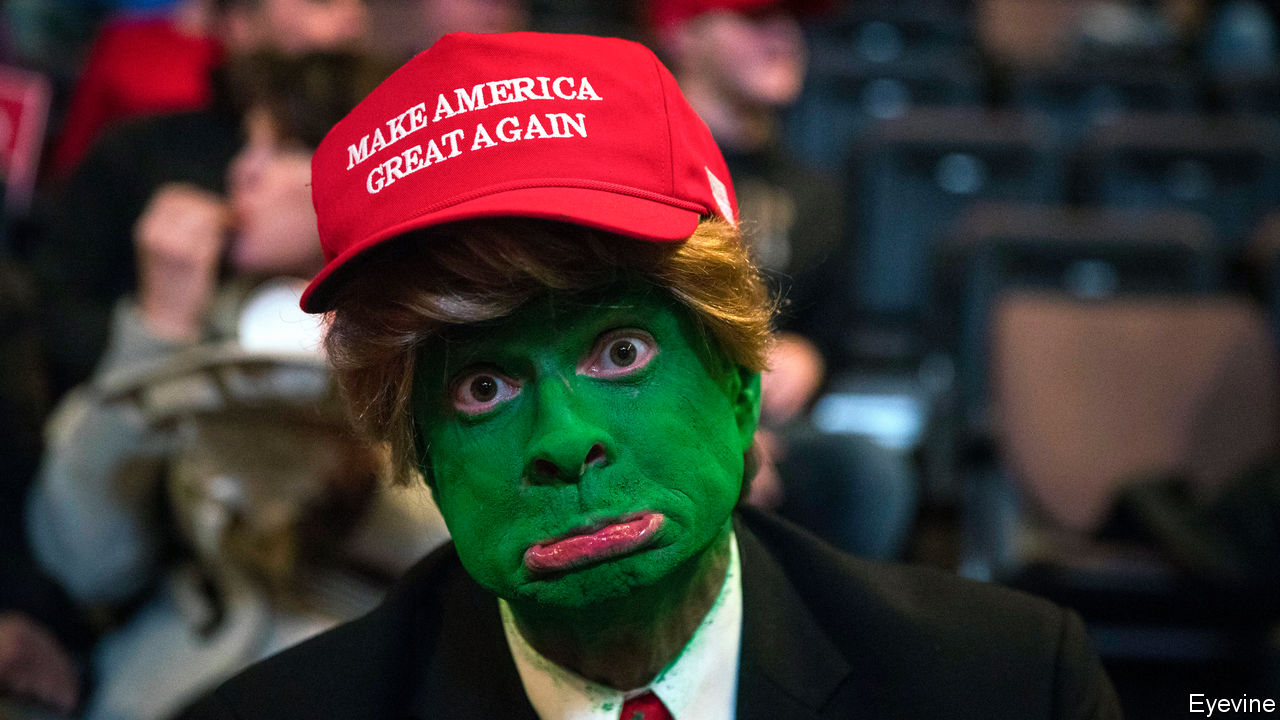 A book excerpt and interview with Angela Nagle, author of “Kill All Normies” 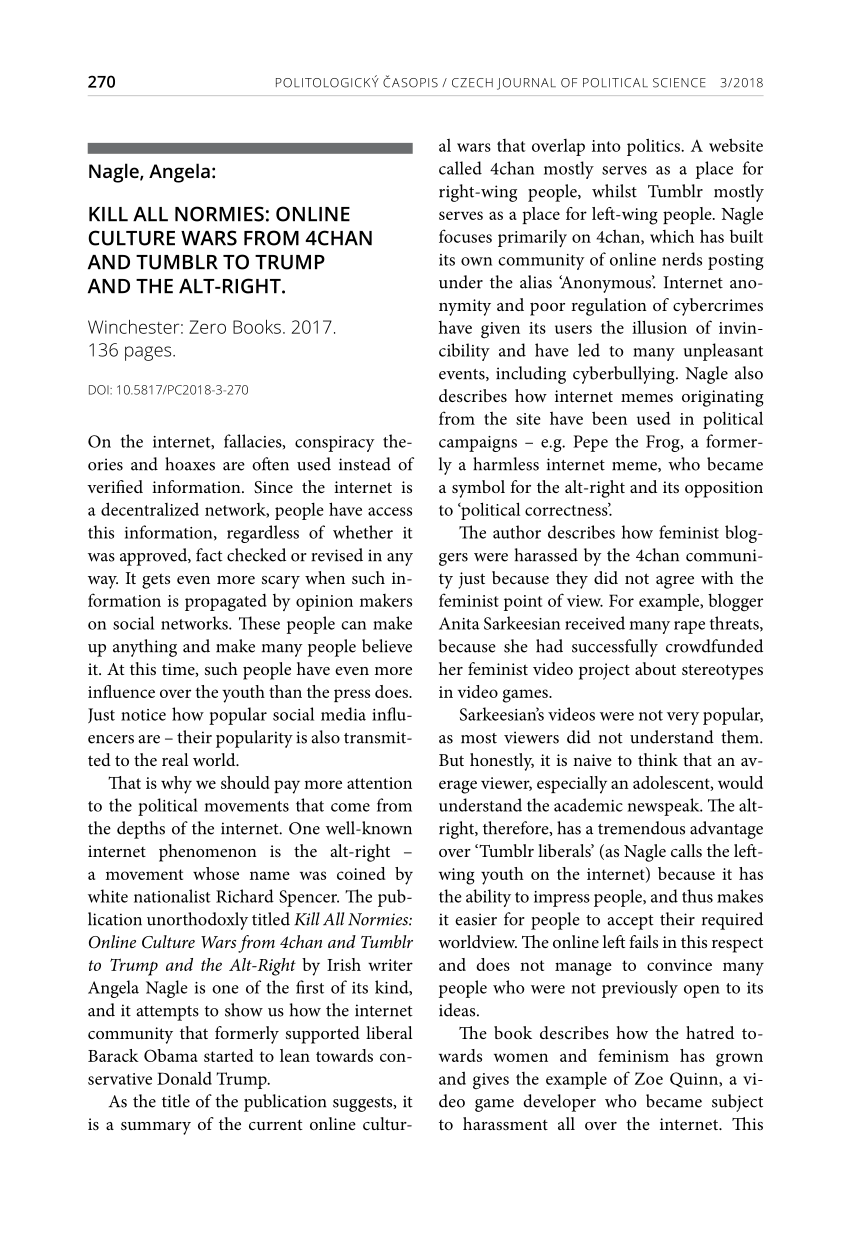 PDF | One well-known internet phenomenon is the alt-right – a movement whose name was coined by white nationalist Richard Spencer. The publication... | Find, read and cite all the research you need on ResearchGate

The Management of Hate

Nitzan Shoshan’s ethnographic research among young neo-Nazis in East Berlin served as the basis for his award-winning publication ‘The Management of Hate’. In a conversation the author talks about the ongoing polarization of society, the resurgence of right-wing extremist movements, and why public agitation and normative judgements in academic debates tend to hinder real debate about the problems.

Ivan Krastev, when asked about the declining power of populists such as Trump and Orban, as a result of the covid crisis:

"This is certainly true. I would argue that populism is not rooted in fear, it is rooted in anxiety. This is a very diffuse kind of fear and people respond by looking for somebody to represent their anxiety. But then comes a crisis like the coronavirus pandemic, and they look for politicians who can take responsibility and solve problems.

And, in this respect, the populists didn’t offer anything. Certainly, many of these strongman leaders who try to pretend they’re in control don’t like this crisis because to a certain extent, crises like these need leaders who have the capacity to cooperate with society."

The Bulgarian political scientist Ivan Krastev believes that the idea of a new normal induced by the COVID-19 pandemic is not going to go away anytime soon.

Trust is definitely a currency that is deflating quickly. Let’s hope that citizens will give more goodwill to committed democrats than populists.

Coronapolitics from the Reichstag to the Capitol

Defying conventional political labels and capitalizing on widespread distrust, a range of new movements share the conviction that all power is conspiracy.

Violent and racist crimes are on the up in Germany, according to official statistics on politically motivated crimes. Crimes by right-wing extremists hit their highest levels since records began in 2001.

Germany’s Interior Minister Horst Seehofer presented the official statistics for politically motivated crimes committed in 2020 on Tuesday. The minister expressed concerns over increasing incidences of politically motivated crimes, especially those carried out by right-wing extremists, such as the murder of 11 young people with immigrant heritage in the city of Hanau in February last year. “Politically motivated crimes are increasing significantly,” Seehofer said, adding that 8.5% more cases were recorded in 2020 over the previous year. The data is very “concerning” because it represents a dangerous trend, despite only representing around 1% of all crimes, he added. 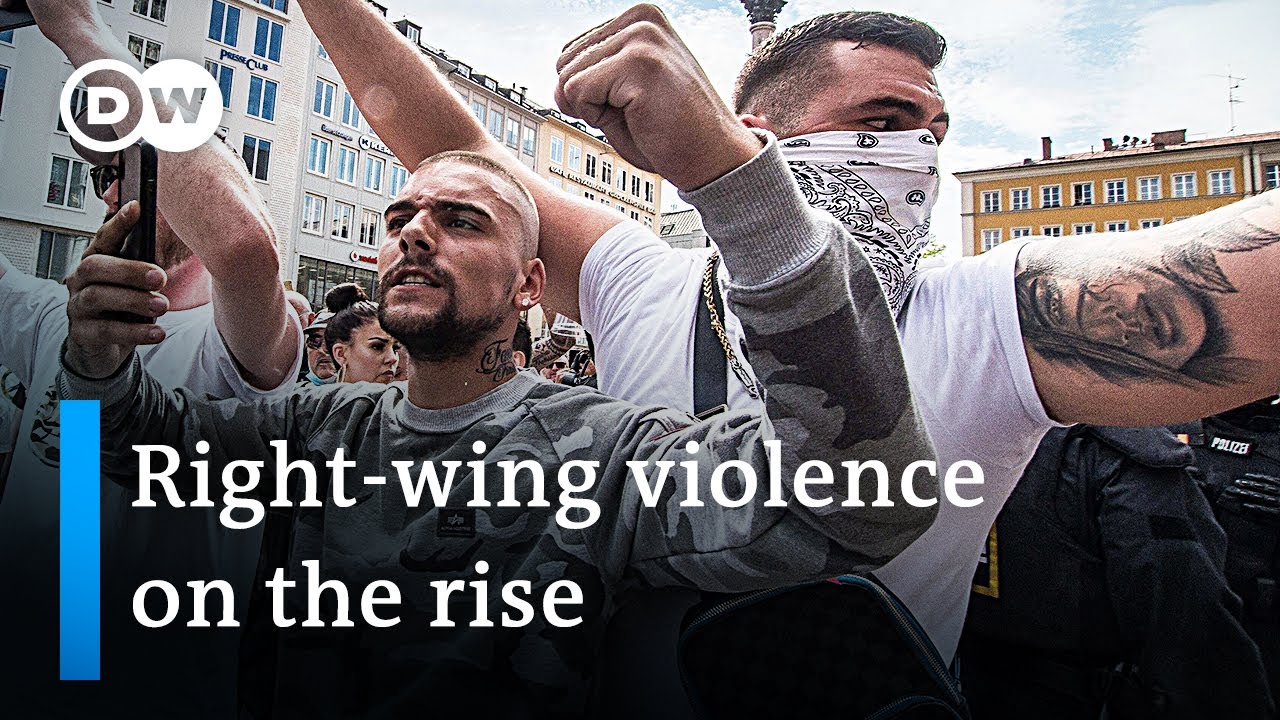 Over the past couple of weeks I was collecting various reports that talk about the state of democracy, free speech and such issues in Poland. Here’s what I have found:

Hi to all. This might be of interest. Article from Matthias Walström (who wrote also on gay prides in Europe).

Social Media Mechanisms for Right-Wing Political Violence in the 21st...

This article maps mechanisms by which online social media activities may contribute to right-wing political violence. High-impact studies on the wave of right-wing and racist violence in the 1990s and early 2000s established that mass media discourse

Dear All, great to see y’all today. Here are the three texts I mentioned. Schaffer came up with the method of ordinary language interviewing; Hawkins uses the method of holistic coding. So, hers is an example of Schaffer’s work: Schaffer on democracy and surveys.pdf (446.6 KB) Shaffer describing his method: Schaffer OLI (ordinary language interviewing).pdf (107.7 KB). And here is Hawkins: Hawkins Measuring Populist Discourse.pdf (213.6 KB). In general, I strongly recommend this book, particularly its methods section: https://www.routledge.com/The-Ideational-Approach-to-Populism-Concept-Theory-and-Analysis/Hawkins-Carlin-Littvay-Kaltwasser/p/book/9781138716537. I have a Kindle copy so it is hard (impossible?) to share, unless you know some trick.