Maybe it’s my own wishful thinking, but I sense a stirring in the Force around economic theory. Since my undergraduate years, I have been unhappy with the dominance of neoclassical economics, and have been tracking contributions that stand outside of it. In the 1990s-2000s many have come from non-economists: biologists, complexity scientists, economic anthropologists. In the 2010s things have started to change. This change might be encouraged by the ticking Doomsday Clock of the climate-and-environmental crisis: policies inspired by the neoclassical model (like environmental economics in the 1990s, that I used to believe in myself) have failed to slow it down, and some scholars are looking elsewhere for answers.

In this context, I would like to make a quick note here for three recent contributions, two academic and one from the policy world. Maybe something to inspire your next cli-fi bestseller?

1. Satisfying human needs with sustainable energy use is doable, but you need direct provision of key services, and forego economic growth

This is a fantastic paper, called Socio-economic conditions for satisfying human needs at low energy use: An international analysis of social provisioning, by Vogel et el., 2021. The idea is this: as we know, humans need to consume energy to satisfy their needs. We also know that the relationship between energy consumption and needs satisfaction is one of saturation: at low levels of energy consumption, an additional amount of energy satisfies needs a lot better. As satisfaction increases, further inputs of energy are less and less effective, until they become zero. The authors claim that how economies supply energy matters. They call this “how” provisioning factors (PFs): access to electricity, health care coverage, sanitation, equality, economic growth etc.

In the next figure, you see the effect of the level of one of the PFs, public service quality, on the relationship between energy consumption (X axis) and three need satisfaction variables (Y axes). The blue curve represents that relationship when the PF in question is at the minimum level among the 106 countries; the orange, when it is at the median level; the yellow, when it is at the maximum level. The impact is huge, especially at low levels of energy consumption (towards the left of the graphs) – which is where you want it.

The results are estimated on a cross-section of 106 countries in 2012. The authors use statistics very cleverly: if statistics is your thing, they compute a model where human need satisfaction is the dependent variable. The independent variable are energy consumption, each PF separately, and the interaction term between energy consumption and PF. This latter captures synergic effects. They then estimate the marginal effects of PFs.

2. GDP growth does not imply an improvement in the average citizen’s economic perspective

This point is made by The Two Growth Rates of the Economy, by Adamou et. al. (2020). One of the co-authors is Ole Peters, and it builds on the idea of ergodicity economics, that we already discussed here. This might seem counterintuitive, but the paper makes a straightforward mathematical argument for it. In practice, according to the authors, GDP growth per capita is an average of the growth if the incomes of each person in the economy, but it is weighted by the person’s income. That makes it a “plutocratic measure of growth”, because it puts more weight on the growth of the income of the rich. Elsewhere, Jason Hickel has argued that GDP growth stands not for the health of the economy, but for the health of capitalism itself.

A different growth rate results when you compute unweighted average of the growth rates of all individuals in the economy. This second growth rate is always smaller than the first. It can be equal in the extreme case in which the income of all individuals grows at the exact same rate. This second growth rate is a “democratic measure of growth”. The authors then go on to study the gap between the two in the USA and in France. The gap is significant in both country, and growing in the USA (but not in France).

It follows that you can very well grow GDP while making the average person in the economy significantly worse off.

The European Environmental Agency published a policy briefing called Growth without economic growth. Its authors side themselves with Jason Hickel and most ecological economists in pointing out that the “Green Growth” model championed by international organizations is likely incompatible with containing global warming within the 2° C limit. In theory you could decouple GDP from materials consumption, but in practice this is not working out. 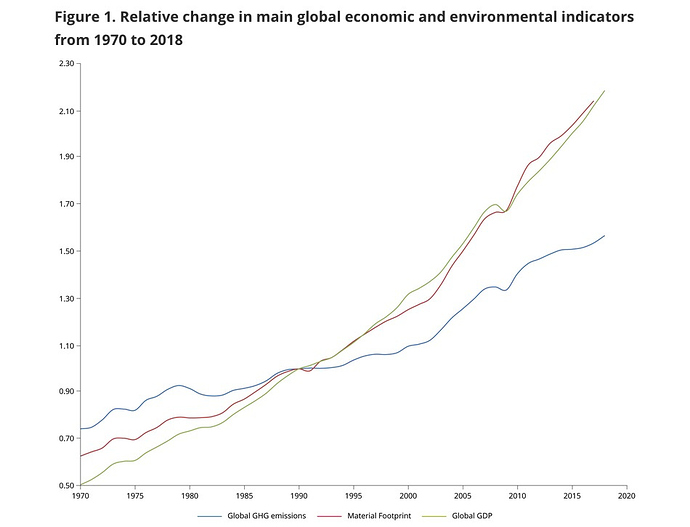 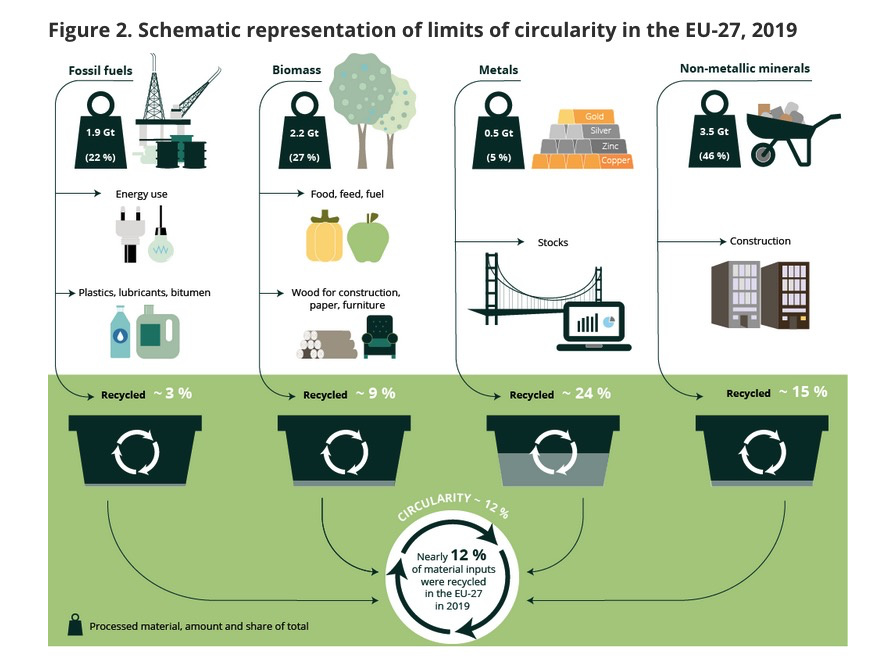 Growth is culturally, politically and institutionally ingrained. Change requires us to address these barriers democratically. The various communities that live simply offer inspiration for social innovation.

The change you detect is not around economic thinking – economic theory has been creative in just this area for at least a century and a half – a LONG time – but politics. There is not a term “neo-liberalism” in economics – it describes a certain political strand of economic vision that seeks an extractive economy – rich people extract income and wealth from natural resources and from productive enterprises – this works especially well if industry is concentrated. Many economists point out that this style of economic system is not efficient, especially since the latter part of the 20th century in rich countries, as it wastes the potential of a large part of the work force in an economy like the US or UK for which the comparative advantage is a well-trained work force producing high-income services, such as education, medical treatment, legal, financial and business services and software, plus intellectual property. But the dominant political players don’t care, as they benefit so greatly from extraction.

You can go back to 19th century and early 20th century economic thinking to see how these topics were addressed. Marx is problematic for a number of reasons – he was actually a better sociologist than economist, but his writing was ridden with hatred of the rich, which overbore his analysis; moreover Marx was long on criticism of the economic structures of his time, but did not propose a viable replacement beyond violent revolution. Hatred, violence and revolution were the mark of the times, so he became popular, but the structures devised by Lenin in the name of Marx were, first of all, not in accordance with the hints of Marx (workers’ committees, etc), but also murderous in the extreme and led to totalitarianism and often to mass murder. Pierre-Joseph Proudhon had a much better proposed solution IMHO – worker-owned businesses – but as he was not revolutionary enough his ideas never took off.

In current economics there is a scad of economists and economic thinkers whom you do not mention at the top of the profession who are revolutionizing the field. My favorites are Angus Deaton of the UK and now of Princeton, who looked into demand instead of supply, which is of course favored by neoliberals, but demand is supposed to be “sovereign”, isn’t it? But not in an economy in which the supply side exerts market power. Also Esther Duflo, who has revolutionized development economics and so much more through experimental economics, as well as Daniel Kahneman, who is of course a psychologist, but won the Nobel Prize in economics and is highly influential in the profession, who along with Amos Tversky invented behavioral economics, and Eleanor Ostrom, yes, a political scientist who also won a Nobel in Economics and who looked at how to solve common resources problems without government intervention. We are even (finally) developing the field of evolutionary economics, to displace the problematic equilibrium approach.

So it is not that academic economics is short of ideas – not even a little – yes, it has borrowed from other fields, and has reinvented itself, as any living social science must. Your experience was at the top of the neoliberal “wave” in the field – the “benefit” of which is that this approach has been proven wrong in many many ways, but now the profession is being rejuvenated in many important and useful aspects.

Social sciences are all going through transitions. It was recently shown that academic psychology studies are about 40% non-replicatable – many of the fundamental studies that formed the basis of psychology in the 80s have been blown up. Sociology is seeing a similar problem with replicability; Anthropology is struggling with the question of its identity in an era when studying “natives” but not ourselves is horribly compromised. Economics has not had these problems to the same extent, largely because it was based mostly on theory which sprang fully armored so to speak from the head of some forceful personality. So yes, the theory is having to become more reality-based. It is an exciting time – sorry your experience was so terrible.

Philip, thank you as ever for your thoughtful comments!

The change you detect is not around economic thinking – economic theory has been creative in just this area for at least a century and a half – a LONG time – but politics.

I respectfully disagree, in part. As I see it, economics has indeed been very creative in the past, but has played the neoclassical game, and only that, for at least the latest 40 years. Sraffa’s objection to general equilibrium theory was simply ignored; and the environmental crisis was immediately funneled into externality theory.

Also, I am not sure you can separate economics from politics. You yourself note that

Since neoliberalism is a political concept, it follows that economics has been bent by a specific political ideology. If that happened in the 1980s and 1990s, it has probably happened before and/or after.

There is not a term “neo-liberalism” in economics

Indeed, and my post does not mention it at all. It mentions the neoclassical model, which does exist in economics. And, after 30+ years of complexity science, frankly looks a bit like Ptolemaic astronomy, with scholars inventing all kinds of intricate ways not to do the logical thing, which is to reject the paradigm altogether.

Thank you also for your list of thinkers. I am aware of most but not of Deaton, and have read Kahneman-Tversky and Ostrom with some attention. The former’s contribution was disruptive to neoclassical consumer theory: unstable preferences, biases of all kinds, intersecting indifference curves… I remember attending a 1993 UCL seminar by Jack Knetsch, a collaborator of the duo, in which he blew the whole theory out of the water and pointed out that, when evidence contradicts the theory, scientists are supposed to jettison the theory. And then we went right on teaching, learning, and doing neoclassical economics. And now, Ole Peters is saying out loud what should have been embraced then: if you need 40 biases to account for holes in your theory of rationality, your theory of rationality is probably wrong.

As for Ostrom, she – like Hirschman – did not give rise to any substantial school, and her work was pushed out into institutional econ and similar.

This is clearly true, and is in fact the subject of the post. Yay!