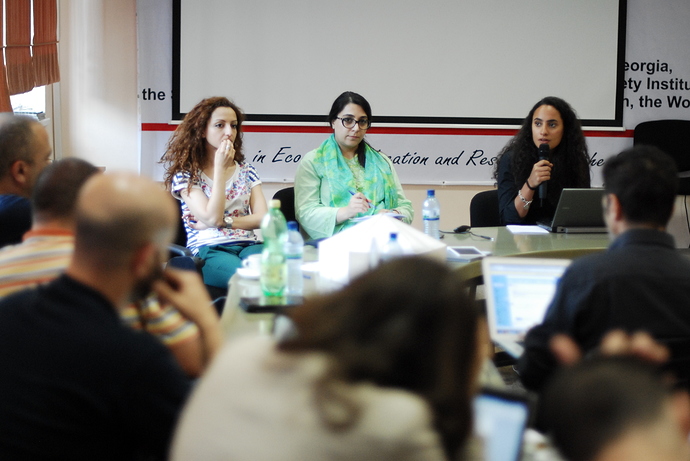 This session was the closing one for the Futurespotters event and it consisted of an open discussion led by @gazbee sorour, @Khatuna and @Hasmik. Here are the most important points regarding the motivation of UNDP offices in Georgia, Armenia and Egypt to get involved in the Spot the Future project, their work with Edgeryders and impressions from participants and contributors in the room:

“At first, honestly, the process was not very easy, […] but then Nadia came to Cairo and we had this amazing workshop with unexpected outcomes []the discussion grew as we went along. In groups they came up with amazing ideas and that showed the power of collaboration. After that a lot of people got onto the platform and started engaging, and we understood the whole concept of edgeryders, the idea of co-creation, being open and trying to work with each other”

“people were very surprised that this was a UNDP initiative. It was very different for us because mainly for the past years we worked for the government, so it’s mostly top down project implementation or on the policy level. We haven’t worked very much with civil society or individuals, so this was a new experience –directly engaging with the grassroots”

Challenges along the way: language issues

Moving forward: building a localized platform in Egypt to engage more and more people to work with each other.

Khatuna: “The main thing for us was to focus on what people are doing, concretely."

The positive side of STF is that we managed to reach out to you, who are here with us, in a way that led to action without having any follow up in mind, so people didn’t expect to receive anything in terms of monetary contribution – and we were aware of that -but collaboration came out of it even from these three months. The other interesting thing is cross country collaborations [] for the actors here seeing they’re part of a larger community, not just their country. “

Challenges: balancing the methodology and how we work in the 3 countries, adjusting to the local context –eg language issues.

Moving forward: we are seeing that people are behind their actions, but how can multinational organisations create a space for multiplying this effort? Or should we, is this our role? There is a clear need for linkage, but what would this be?

Challenge for Armenia was also the language issue – language was kind of a barrier, participants submitted stories and tried to participate in their language.

Moving forward: Wants to hear from Edgeryders how to engage the community? One thing is to establish a social innovation platform and say <here we are>, and another is to get people interested in it.

All 3 country offices acknowledged that Spot the Future gave them an opportunity to engage with those people and organisations beyond the “usual suspects”. “In classical UNDP terms, usual suspects are NGOs that we are usually engaging with – when we need engagement of the civil society we go to them”

The work with Edgeryders on Spot the Future helped eg UNDP Georgia to make connections with new organisations such as JumpStart, so as an outcome future collaborations will fall naturally in their work.

Edgeryders, however doesn’t want to become a professional representative of the “innovators” – like if it were a category. If we are reifying this many will want to get themselves inside a label that sounds great, that incentivizes people to portray themselves in a specific way, often victimizing themselves. But this is not the way forward:  we spot people who actually do the work, without confining them to a narrow category.

@Grupo Cooperativo de las Indias: “you cannot eat the bird, look at the other side”

“In my cooperative we define power as the ability to generate consensus. The problem is that you try do to too much. You try to achieve new social consensus, in a way you step over someone always and you cannot do that – you work for the UN. A way is to detect the consensus that is undeveloped, and that are many consensus that no one talks about loudly”

@remi : “the high quality presentations and the individual contacts that I’ve made [] I’ll take any chance to participate again in a new opportunity”

@Inge: “the moment I got sucked into the community I realized their way of working, but I was pessimistic – this is Georgia, people don’t participate. As a community builder it was difficult to reach out to people I didn’t know, who didn’t use social media that much. After the 1st workshop I was so impressed about the people and stories they shared – it was really about what they wanted to talk about”

? re: What UNDP could take on from this - “definitely more flexible and less result space management approach to funding eg incubator system. I would like to see a panel of people selecting the projects, not just UNDP and their agenda.”

@Hazem re: the people UNDP wants to reach out to - the place where they engage is not the one people feel confortable with. People doing things on the ground are harder to reach, they don’t have trust in orgs like UNDP, they work with more flexibility than the rigid ways of such organisatins, and don’t see themselves as innovators.

@Ulrike von Ruecker: engagement with citizens that do things often stops at institutionalization, these people are not institutionalized enough to be eligible for support. At the moment the scene is kind of blocking itself. Cities like Cairo is not where the majority is – we need to go there, to the other parts of Egypt. It’s a question of trust and how people are invited to engage. Hanging on to the results all the time breaks the process, it can make you lose people.