Based on our meetings this week, I am creating this thread for a “wishlist” of codes for @alberto to visualize for the final report.

What we discussed was visualizing the key codes corresponding to the sections of the report (e.g. “the cardboard state” “retraditionalization” etc. – since those subsection titles are not necessarily codes themselves).

@Alberto said he should be able to produce Tulip visualizations that express (in color) the gender dimension on top of the association metrics being expressed through thickness of lines.

Please post your wishes below in the following format:

For easy reference, here is the link again to the master draft of the final report in progress.

Please post your requests over the next couple of days so we can discuss all of them at the Ethnographers meeting on Friday.

I am reading this.

I have finished a first look at the German corpus, minus the analysis by gender (but that was in a previous post).

@Jirka_Kocian just for my organizational ease could I please also ask you to put that list in the format I lay out above? The main thing I need is to know which subsection of the Czech section of the report each node is meant to correspond with. That can help me keep track of where we will be inserting screenshots from the visualizations as we progress with the draft.

Lubomír Volný in the usual b>=4 graph: 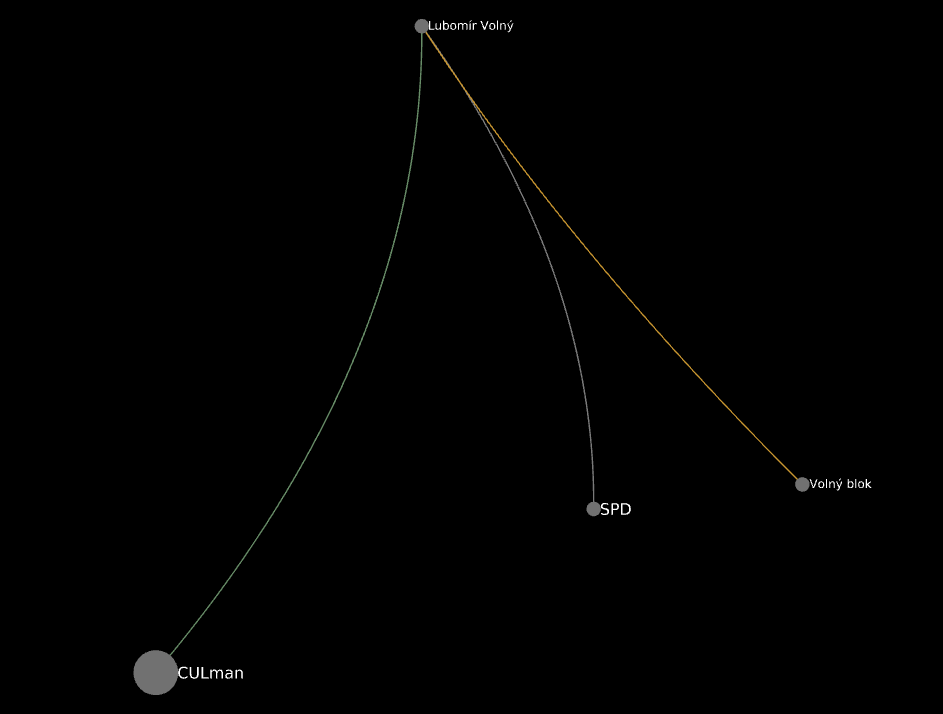 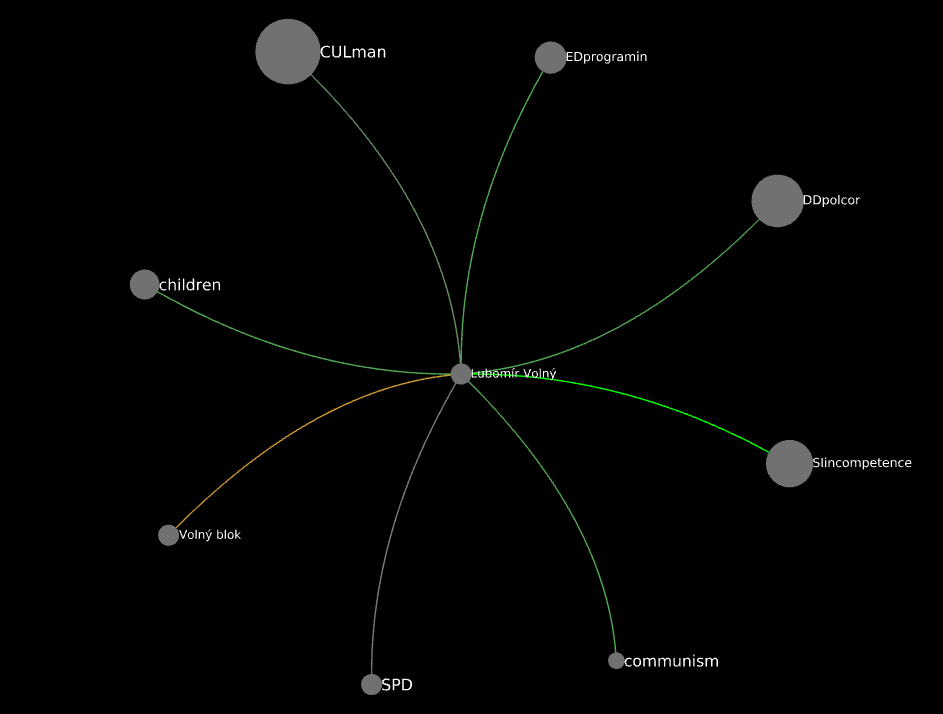 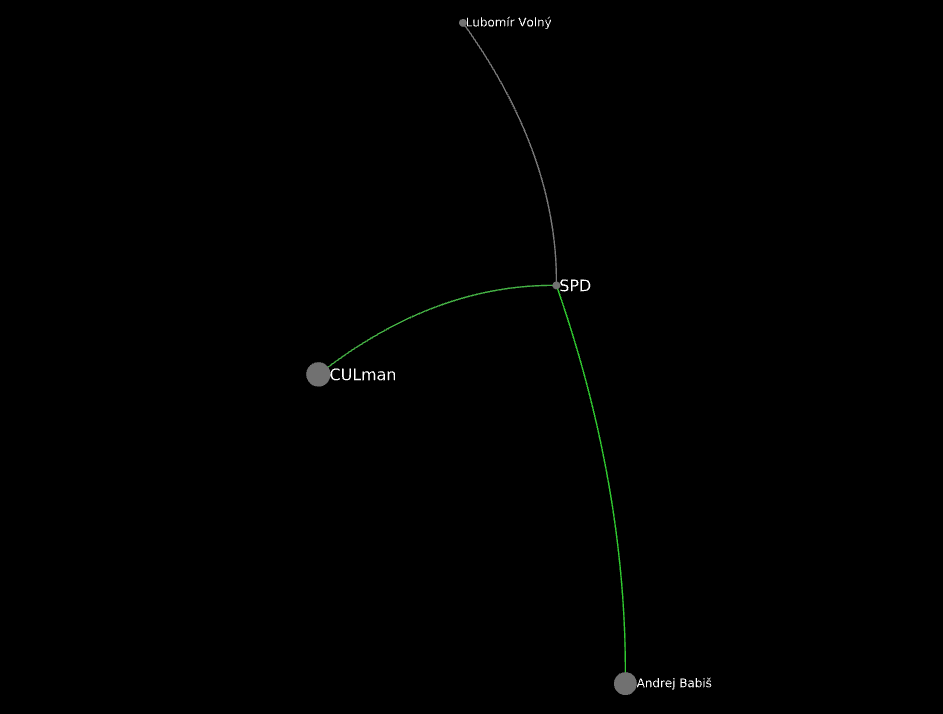 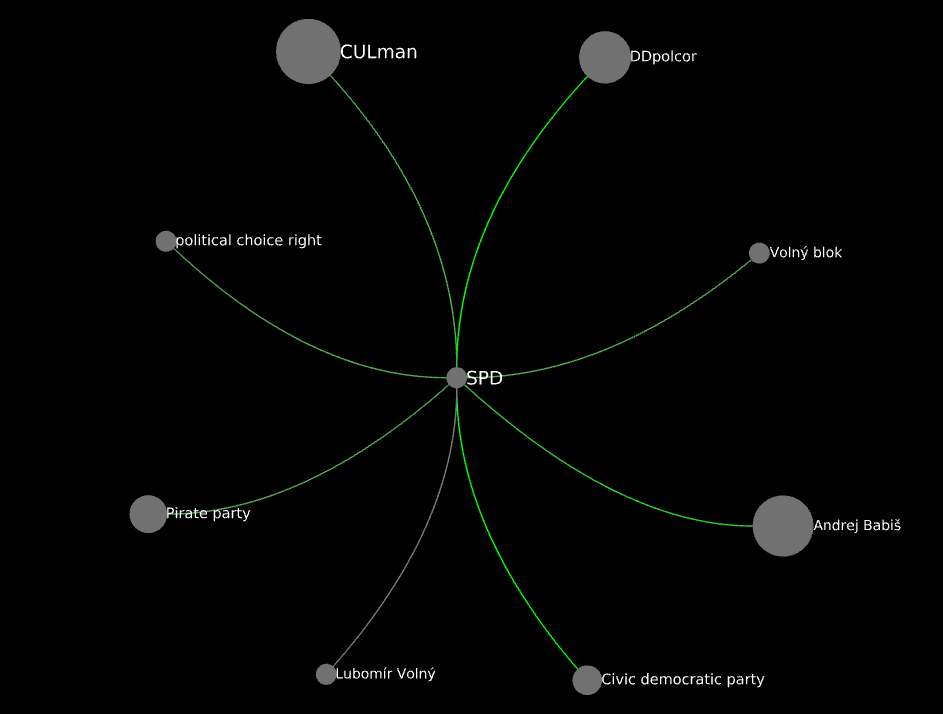 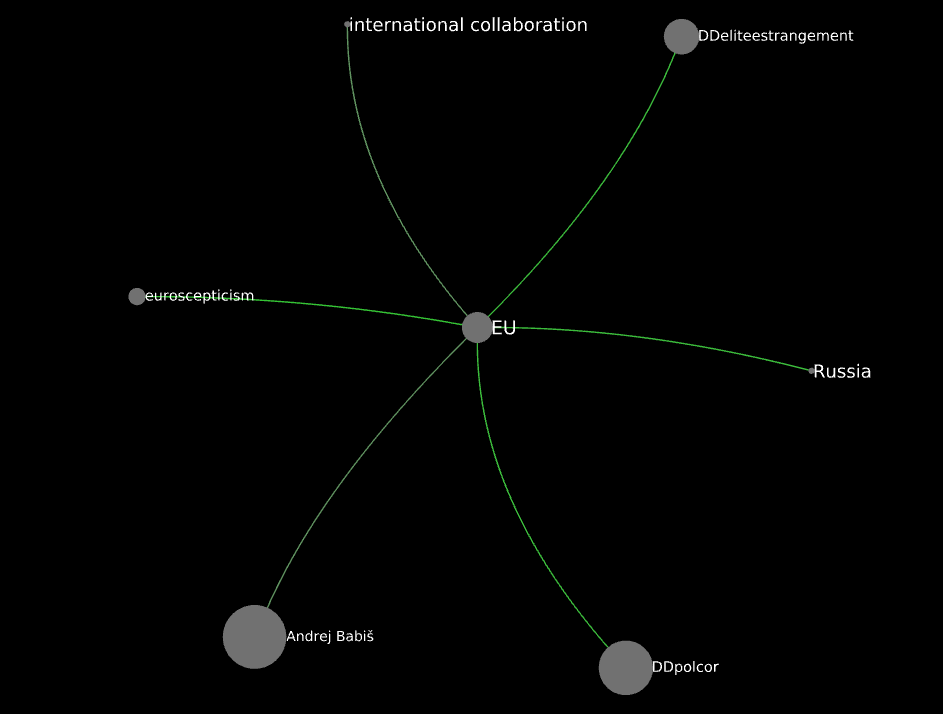 I’ve been drafted into a meeting with the Director at 14.00 UK. I’m afraid I’ll have to miss this week’s meeting.

I als have to miss, I am still on the road. 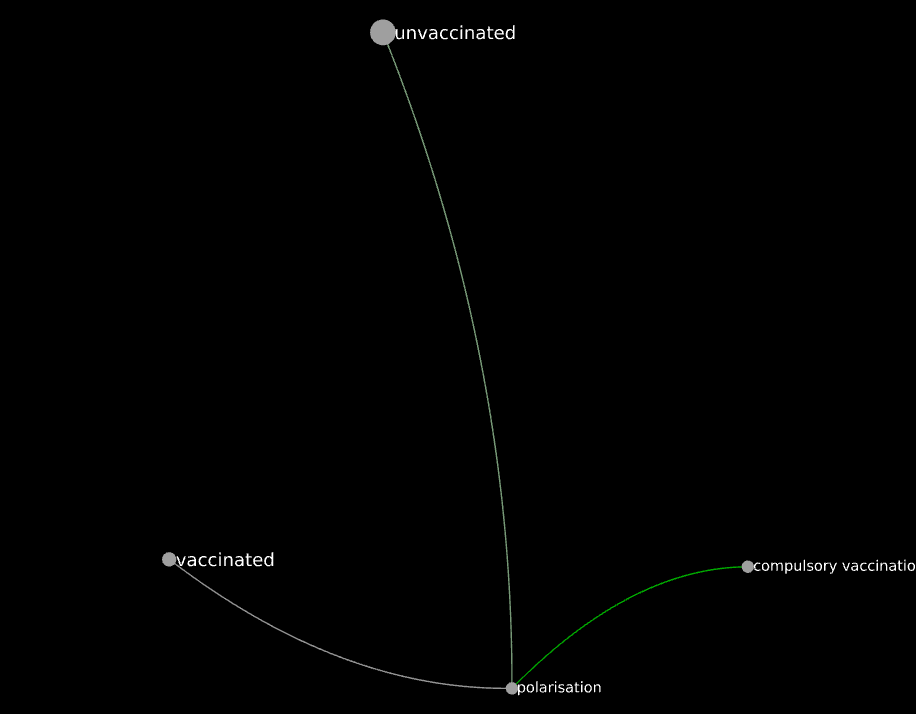 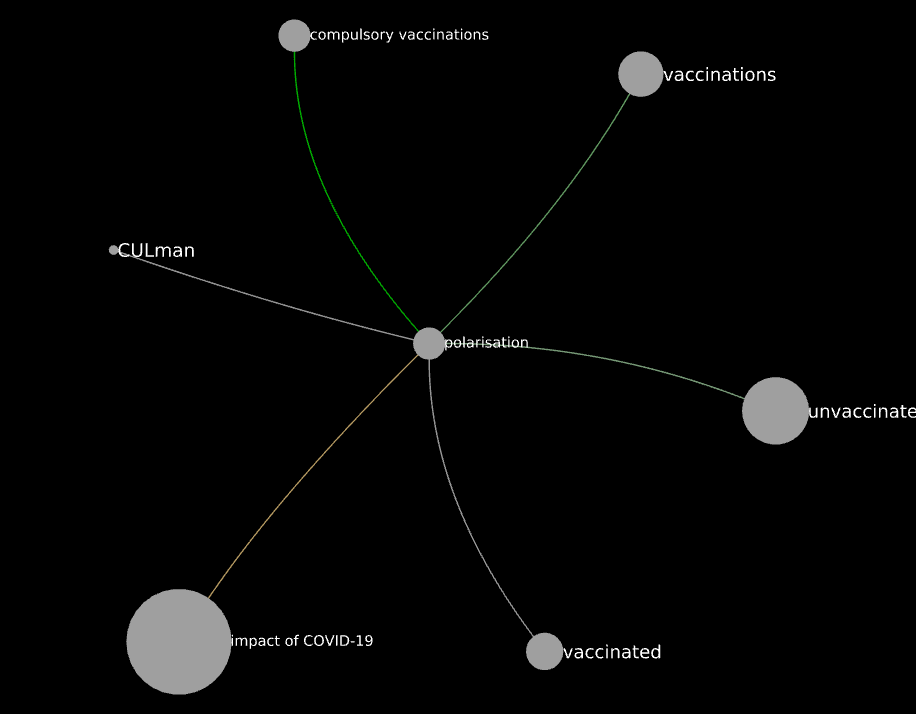 anti-vaxxers at d >= 6 (below). At d >= 7 it remains connected to vaccinations, unvaccinated and compulsory vaccinations. 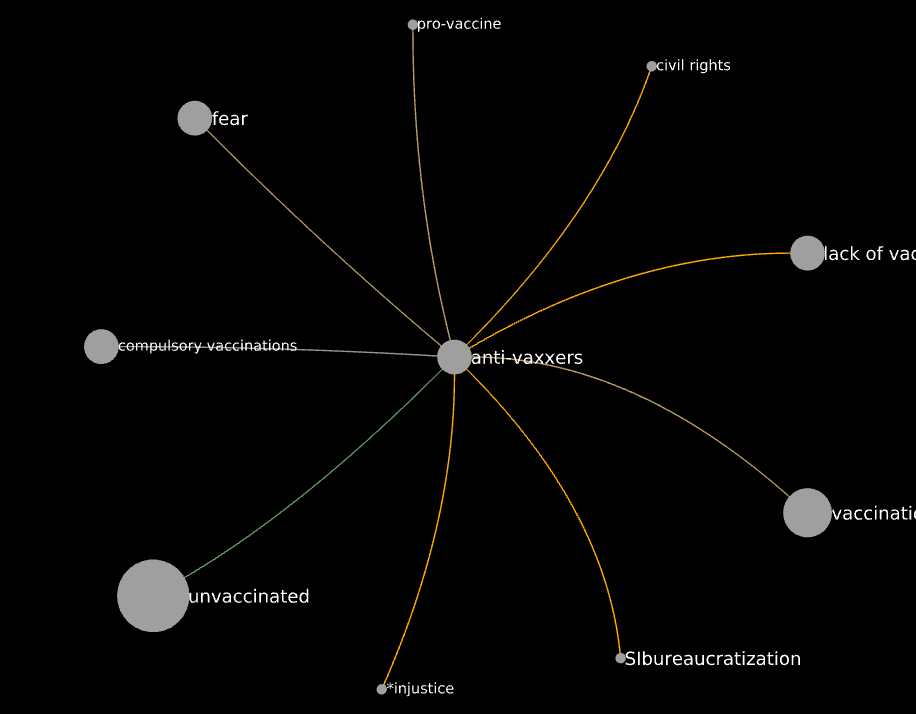 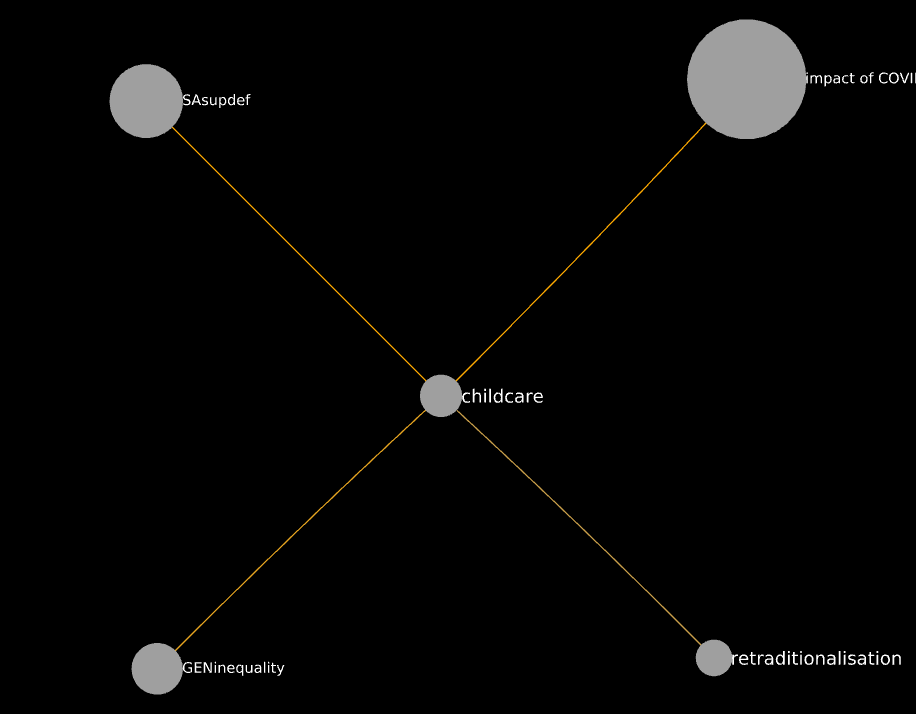 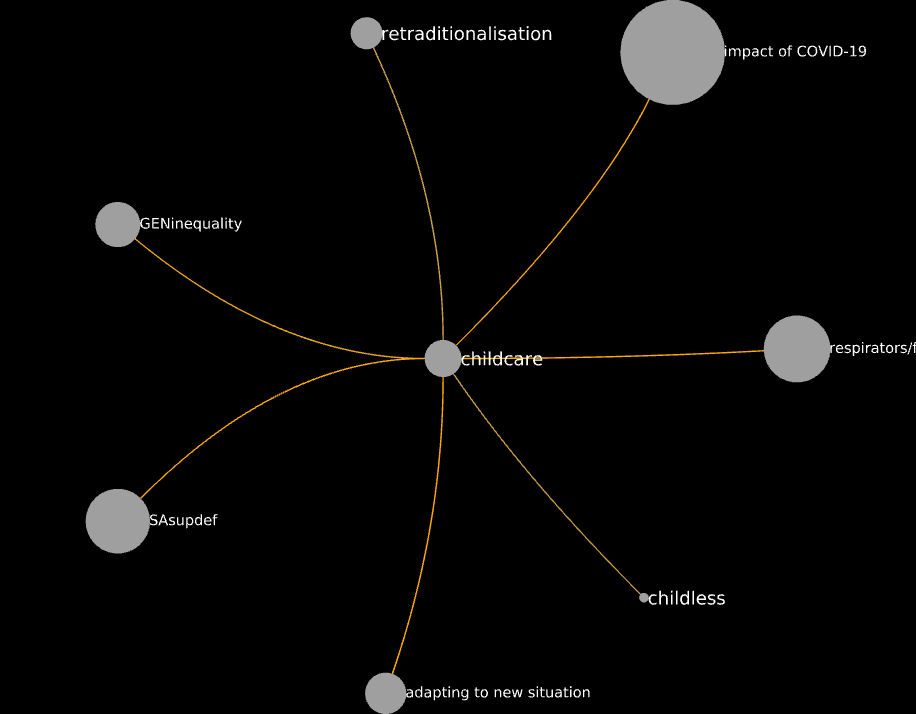 Can the Polish “team” please put up their wish list?

Hi, as promised Mania’s Polish codes vis the wishlist below:)

Let me know if there is anything unclear about my requests:)

Many thanks @Maniamana! @alberto let us know, please, when you are done with visualizations. I will try to spend as much time as I can on the text of the deliverable. I just finished the next round of edits for the introduction (Have a look, particularly @Nica . I have a great quote from Hocart, a maverick anthropologist (via one of my favorite “classics” of all time - Marshal Sahlins). It has something to do with the so called “ontological turn” in anthropology, which - I think - provides us with an interesting and quite befitting ontological grounding.

@alberto and @Nica Alberto you said that you want the most comprehensive list as possible in one shot, so here are some additional ideas from Wojtek and myself, in addition to Mania’s list:

To @rebelethno : in terms of incorporating the visualizations, as Alberto produces them, into your sections, I envision everyone creating sub-sections in their parts of the report, and writing between around 500-700 words (per subsection) discussing how the visualizations align (or don’t align) with the ethnographic insights, focusing on the following:

It would be great if people could make separate mini-sections corresponding to all the bullet points above (with sub-sub-headings just for ease of reading).

Can we aim to have a preliminary draft of this done by the ethnographers meeting Friday? It does not have to be written out / fleshed out, more like substantive placeholders so we can see what is emerging in terms of these trends (confirmation, nuance, contradiction, further inquiry).

Me @Jirka_Kocian and @SZdenek are meeting on Wednesday to produce another list of key codes, this time deducting them from the 3 written up ethnographic section (written by me). The first set of codes which we gave to Alberto was more general and based on the frequency of codes.

We can pass this list to @alberto on Wednesday evening, not sure how long it would take to produce new visualizations for that?

When it comes to the “final draft” of the commentary on the visualizations, Jirka said he will be happy to take a lead on that (with mine/Zdenek’s insights). If you think each of us should write up something, it is not a problem, I am just not sure if I will be able to do it by Friday as this week is extremely busy for me (I am presenting at two different events). But I will do my best!

*Would you like us to comment on the visualization that are already done, or should we maybe help for the next round based on our Wednesday meeting? Let us know what you think works best…

@jitka.kralova thank you for the update! Understood about the timeline – if it does not happen by Friday it’s okay – it sounds like the Czech team has a solid plan and a division of labor set-up, that’s all fine with me.

I think if there are things that you already see based on the frequent code visualizations that are salient enough that they will make it into the final report no matter what, please do comment on them, otherwise it sounds like you will have a more refined code list on Wednesday, so let’s wait for those.

Magda, I like your approach of “dual ego networks”. I don’t think I have seen it before.

At b >= 4 the network is still quite big: there are 82 codes connected with either Law and Justice Party or Civic Platform/coalition or both. If I had chosen d rather than b it would be larger still. 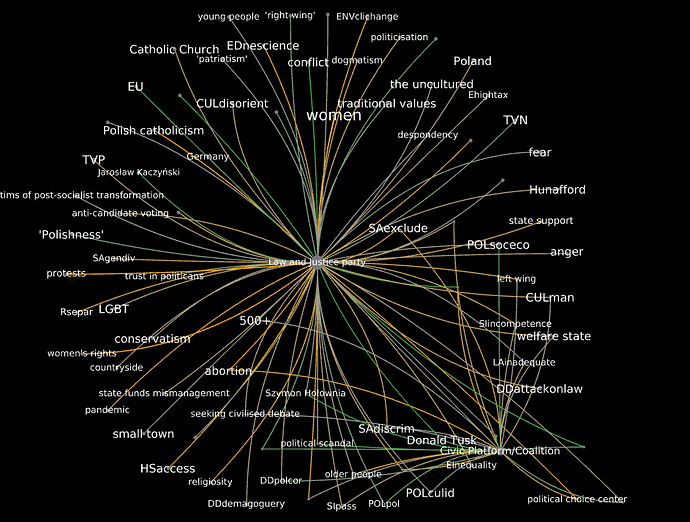 On the other hand, raising the value of the reduction parameter b reduces the number of codes associated to Civic Platform but not to Law and Justice. At b >= 7, only political choice center remains. 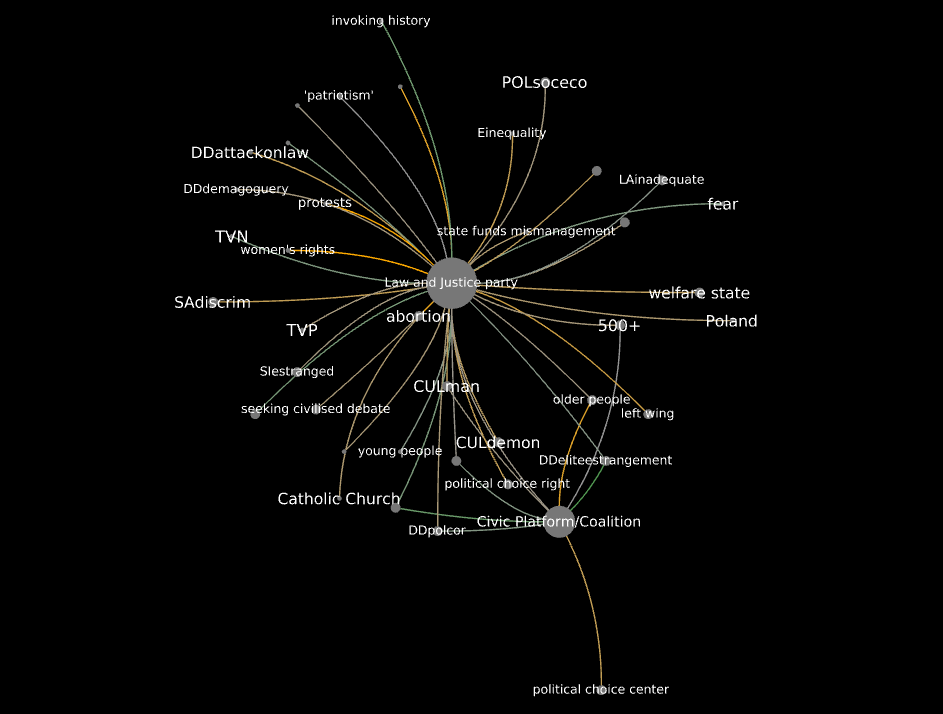 The problem with this one is that Law and Justice Party is one of the richest codes in the whole corpus, and hate is definitely not. At b >= 4 hate does not even appear anymore (it does at b >= 3, which means that exactly 3 informants in the Polish corpus have been associated to that code, and then its only edge is to Law and Justice Party ). To make meaningful visualization I had to go down to b >= 2. But then, remember that each edge is supported by only 2 informants. 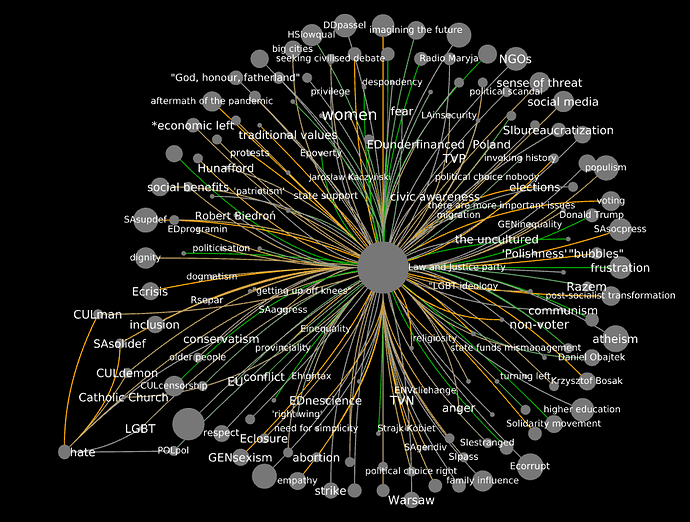 Vis 3: POLculid ego network with cluster detection algorithm to see if there are connections between nodes that connect with the lockdown node, no cooccurrence reduction.

This I do not understand. An ego network is just a star network around one code. There are, by construction, no clusters.

That said, I exported the unreduced ego network as a table. You can find it here, where you can also search and sort by the different variables. Below is a preview sorted by edge breadth:

See my previous answer about the absence of clusters in ego networks.

The full table of that ego network is in the same spreadsheet as the one above, but in a different tab. A preview:

Similar point about cluster detection. Since these are networks of ego networks (instead of one single ego networks), cluster detection is mathematically possible, but it makes little sense because each of the ego network is going to map to a cluster, barring anomalies that I do not see in this network. These are filtered for b >= 4, so at least 4 informants. 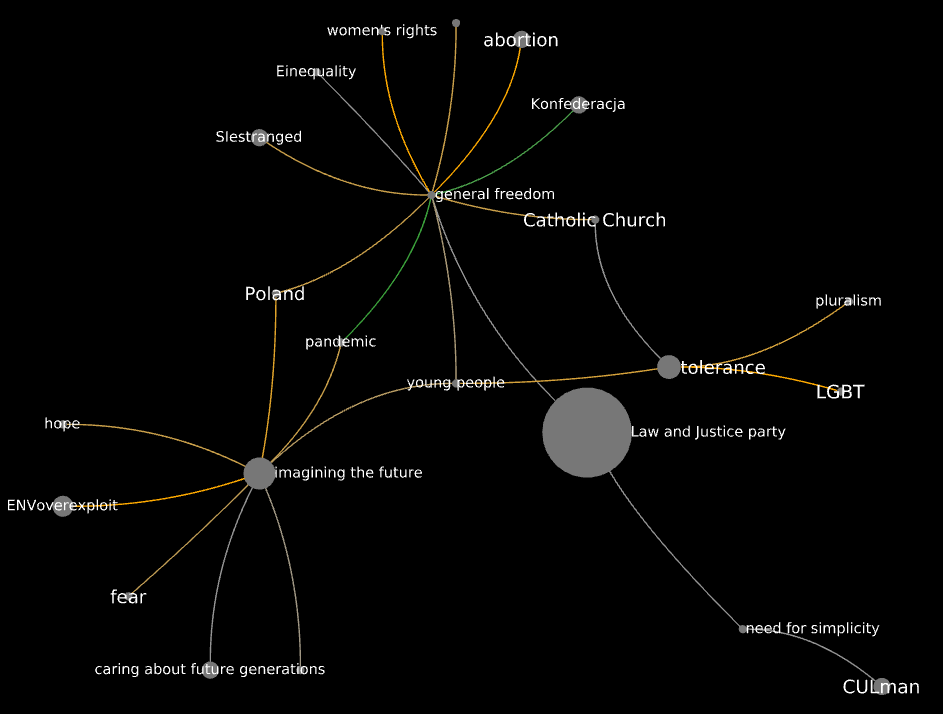 This appears to be irrelevant. With b >= 2 there are only two edges (below). At b >= 3 it disappears completely. 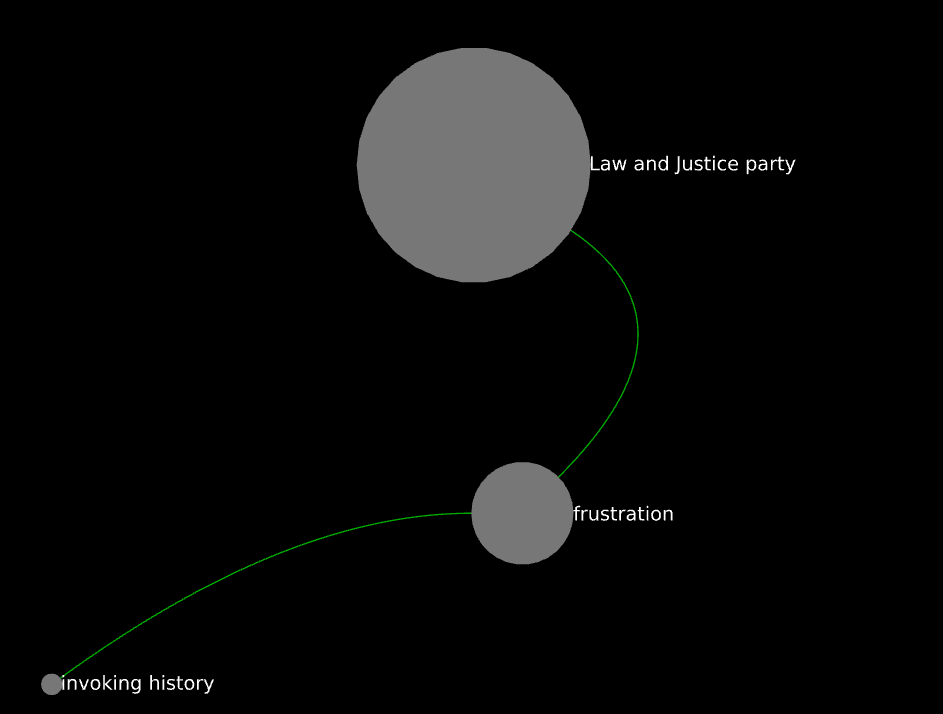 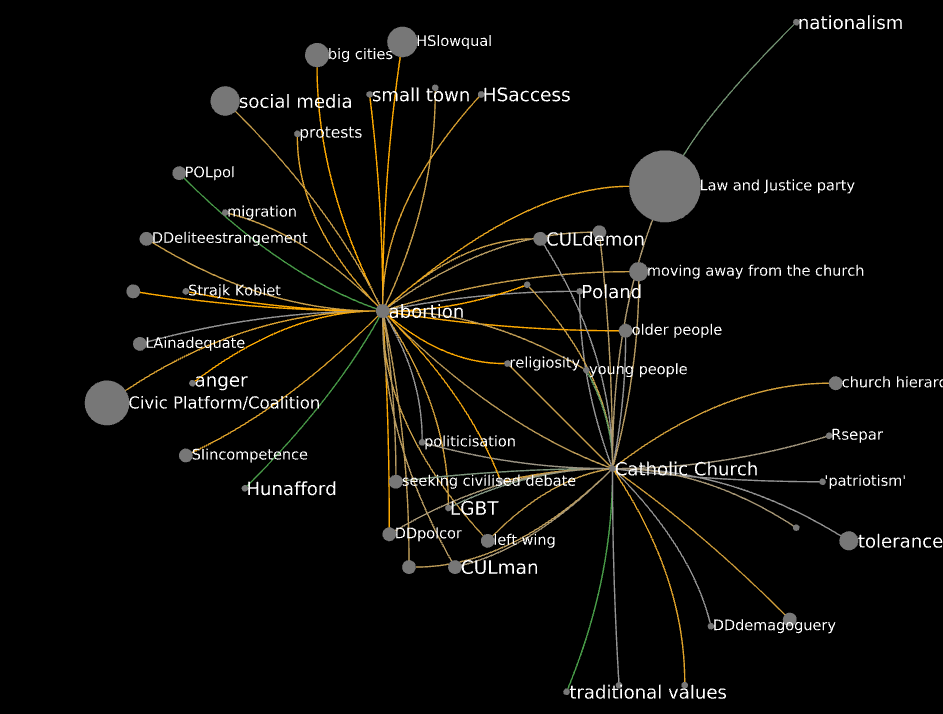 This is quite large (169 codes including these two, 199 edges). Many of them are single-informant edges though. 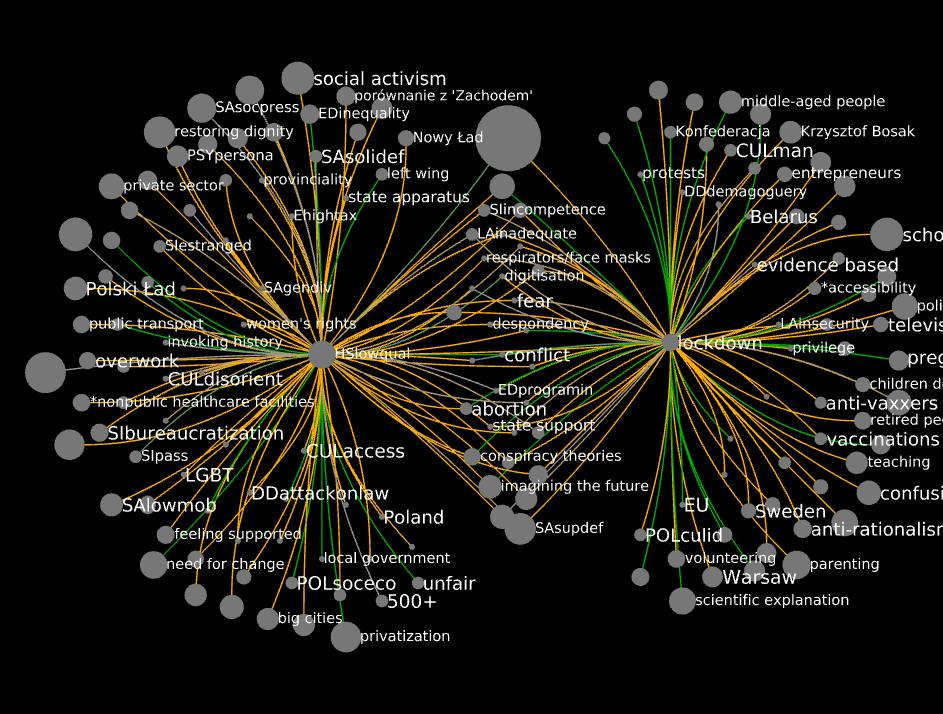 @alberto and @Nica Alberto you said that you want the most comprehensive list as possible in one shot, so here are some additional ideas from Wojtek and myself, in addition to Mania’s list:

Thanks Jan. I have gone through Magda’s now, and will be tackling these as soon as possible, but not day and not tomorrow.

A question. Which one do you need?

a. One separate ego network for each code
b. Superimposed ego networks of multiple codes in the same visualization (for example, one single viz for impact of COVID-19 and CULman and SIincompetence, plus all their neighbours

Also, do you want to see unreduced networks (which could become quite large) or highly reduced ones? Are you wondering about the overall pattern of association of these codes, or about the structure of the codes (remember the ICQE paper ab out structuralism)?

@alberto - Many thanks. I will disuss this with our team today (Wednesday) ro eraly tomorrow and wil get back to you. @Maniamana and @Wojt - can we get together soon to decide?

Wow @alberto, thank you so much! What I meant by clusters in ego network might have worked only on a data set that also notes relationships between other nodes, like - all those nodes appear around this one ego node, but how do they occur with each other? I think this could be visualized by colors, but again not sure we have a data that notes that.
That’a quick answer.
I will sit down to it tomorrow properly, and look through your visualizations, already excited!!