“The control of undertakers over burial shows how radical monopoly functions and how it differs from other forms of culturally defined behavior. A generation ago, in Mexico, only the Opening of the grave and the blessing of the dead body were performed by professionals: the gravedigger and the priest. A death in the family created various demands, all of which could be taken care of within the family. The wake, the funeral, and the dinner served to compose quarrels, to vent grief, and to remind each participant of the fatality of death and the value of life. Most of these were of a ritual nature and carefully prescribed-different from region to region. Recently, funeral homes were established in the major cities. At first undertakers had difficulty finding clients because even in large cities people still knew how to bury their dead. During the sixties the funeral homes obtained control over new cemeteries and began offering package deals, including the casket, church service, and embalming. Now legislation is being passed to make the mortician’s ministrations compulsory. Once he gets hold of the body, the funeral director will have established a radical monopoly over burial, as medicine is at the point of establishing one over dying.”*
- Tools for conviviality, Illich

Religious life on Witness is complex, and, as pointed out by Adromache Kosovitch, depends on which definition of religion is adopted. There are a few systems that could be classified as complex, interlaced memes that impose a causality on the universe and contain within them mechanisms for their own spread and reproduction. There are many more if one considers rituals: so this page is neither a completely taxonomy of beliefs, but merely an attempt at bringing together most common.

@nadia, have a look?

Oh lord. I was thinking of Herbet’s Dune: 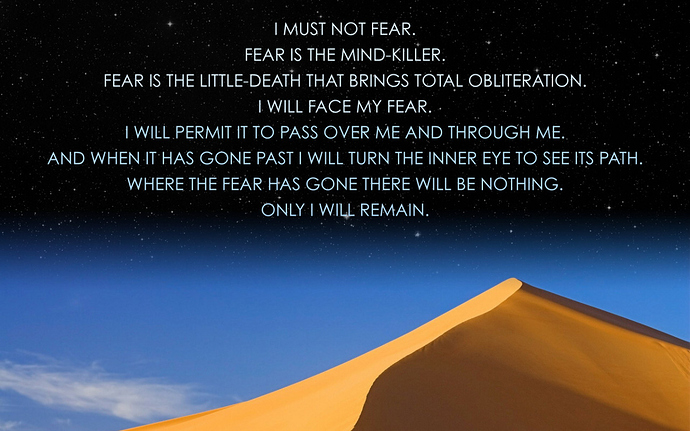 And Herbert was no stranger to sexual symbolism.

The wild sexuality of combat troops has been remarked by observers throughout recorded history and has usually been passed off as a kind of boys-will-be-boys variation on the male mystique. Not until this century have we begun to question that item of consensus reality (read The Sexual Cycle of Human Warfare by N.I.M. Walter). One of the themes of my own science fiction novel, Dune, is war as a collective orgasm.
- Frank Herbert
(http://www.jacurutu.com/viewtopic.php?t=1214#p38497)

We definitely have to keep it now!

Many come one: Individuals inhabiting different bodies can opt to meet and travel on a journey in one body sleeve for a period of time. Multiple selves can cohabit a body by optimising use of the bodyware (neural pathways, nutrients, circulatory wiring). This is the mechanism by which the individual and collective flow between becoming, being, unbecoming and nonbeing

If this is a bit off there’s an article here: https://www.slideshare.net/cookiesncode/el-imam-nadia10034

This sounds like it could be one hell of an underground thing in Libria, linked to Nyogi Buddhism. Unwho in particular sounds like both Libria and the Assembly would have seen some use. Do add it!

The balancing ideology states that the Earth can support a certain number of each species, including humans, but that technological advances skew the resource requirements of each species until they become unsustainable. This is usually written as an equation positing that the n (number of individuals of a species) multiplied by t (level of technological advancement on the Carylye-Berson scale) = R (total energy ‘support capability’ of the earth) divided by the total number of species on the Earth.

Perhaps this is why Christendom is void of Protestants? Over time, perhaps environmentalism merged with Predestination theory?

Henry VIII: -coughs discreetly- OFF WITH HIS HEAD

mm I thought it could be a distrikt in and off itself? I forgot to add the destruction market (assassins/kill bounties, soulhacking - think Morgan’s Conflict investment model but the conflict is inside the bodysleave or in the transitions mechanisms) https://en.wikipedia.org/wiki/Market_Forces

I absolutely love everything here! 10/10!
Oh and I did notice both the ‘little death’ as a Dune and a orgasm reference — it was very interesting to see that this happened accidentally! It felt SO deliberate!

Oh, for some reason I don’t have edit powers here!
I wish I could just add some stuff, but anyway! Here’s some additions:

Can be - more cyberpunk than cyberpunk. I am wary of Morgan because the bodysleeving idea is used purely in the pursuit of killing stuff, and not really explore imo. For example, if you could interface with a human being that way, you could feasibly construct simulations and leave meatspace behind altogether. Or have human minds controlling robot bodies, which would both break the monopoly of the rich on eternal life AND get around the body-shortage that is rampant in Altered Carbon.

What if you merge this and the Necropolitics Extreme Edition idea, and summon @amelia, and spin off a Distrikt?

I suggest we ought to do away with the notion of eternal life in this world, make it metaphysically impossible or at least a paradox because of the cyclical nature of time? Go, reset, go, reset - always a transformation - you do no come back as yourself, the transcendence to some other state is real…?

done and added all to wiki. Have a look?

Great additions. Interesting parallel to the recurring primordial forest myth of English folklore: from Mythago Wood to Tolkien. Added! Amazonia generalized to make it the dream-territory of all rainforests.

Nice, worked it in. One critique:

This is textbook Buddhism.