Even if you do not own a car, you can’t escape the nightmares – your car-owning friends certainly shared their stories of car repairs, in exchange for much needed comfort. Now, every failure of a car is either mechanical or electrical related. The mechanical ones are as old as horseless carriages … even carriages with horses had them, in addition to biological failures. But electrical and especially electronic failures, that’s a novelty. And that is what automotive nightmares are made of. 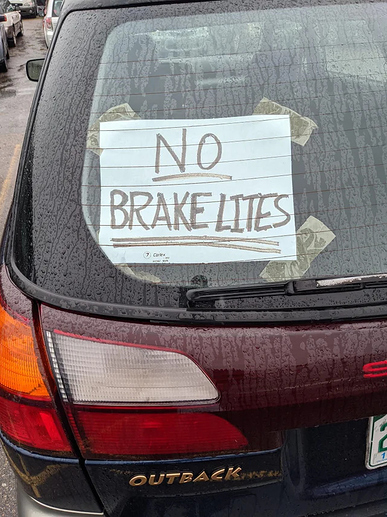 Do your brake issues cause you nightmares? Here’s an easy fix!
(source: user Boosted3232, via Reddit)

What follows is empirical anecdotal evidence. (Empirical? Because you can ask any car mechanic in high-income countries and will get anecdotes just like these, as many as you care to listen to.) 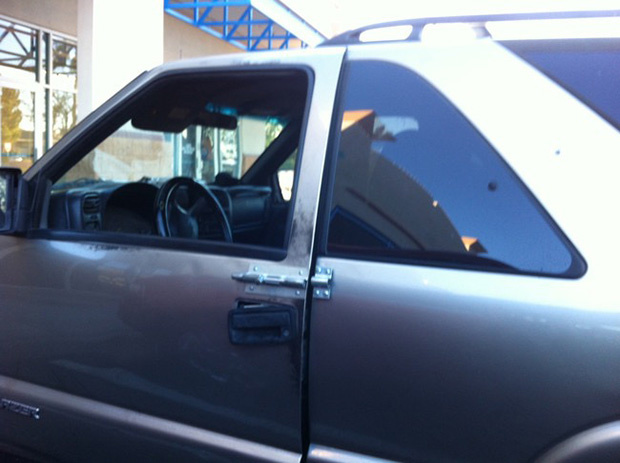 Do your central locking system issues cause you nightmares? Here’s an easy fix.
(source: user Funky_Pickle, via Reddit)

Electronic car keys are another nightmare. Made from a thin plate of ferrous metal in times past, they are now apparently made from a platinum-gold alloy. Or how else are we supposed to explain that “A replacement for your spare electronic car key can cost between $250 to $750. However, if you have lost all your keys, you need to reset your car’s computerised system, then create and code an entirely new set of keys. This can cost around $2,000 to $5,000.” (source). To give an example, somebody was quotes 1200 EUR for a new key for their Mercedes car (source). 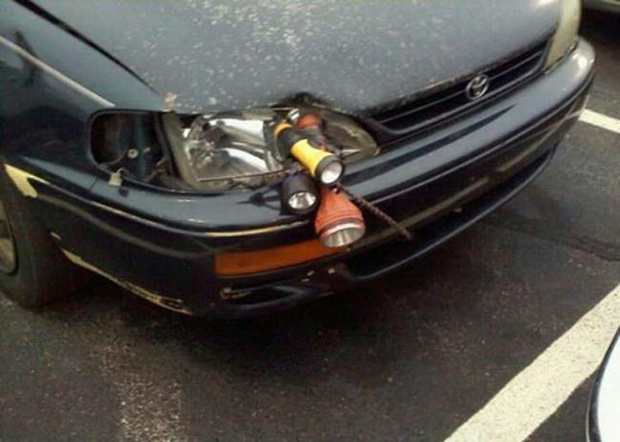 Do your automotive light issues cause you nightmares? Here’s an easy fix!
(source: 20 Hilarious Car Repairs That Are Just Too Brilliant To Be Wrong!)

Somebody’s right fog lamp failed. Spare parts would be around 4.50 EUR even if the bulb, wire and fuse would all be broken at the same time. But we live in modern times. Now the spare was around 450 EUR (and 150 EUR for testing and repair) for a little black box (literally black) answering to the name of 3C8937049AC that was at fault (source, German). Didn’t car lamps work just fine with wires, bulbs and fuses in times past? What exactly does this black box with electronics (“ECU”) do, except breaking down?

Another person’s headlights failed. Since these were xenon lights, they were a bit, umh, complex. The lamps themselves plus their companion black boxes with electronics had to be replaced. The cost? 950 EUR (source). 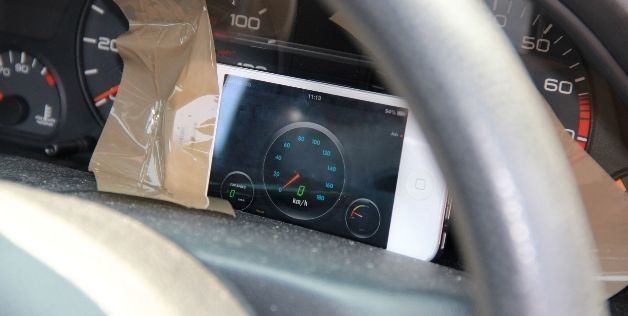 Do your automotive instrument issues cause you nightmares? There’s an app for that!
(source: 40+ of the Most Hilarious DIY Car Repair Fails of All Time)

A month later, the our troubled person with the headlights issues from above was hit again with car nightmares. His dash instruments were acting up and the whole car was not running properly anymore (source) … the engine had very little power output, was not taking accelerator input properly, and the brake was not working. (Turns out, the brake issue was “only” because the engine was silently dying while driving so that the engine-supported brake did not brake properly anymore (source) – umh, how comforting that the brake still worked but only appeared to not work.) Anyway, not drivable anymore, and the official repair shop could not find any issue (source) (in other words, they were overwhelmed by this problem). Anyway, 160 forum messages later they had figured out this issue together (source). And the culprit was: a defective crankshaft position sensor. These defects do not show up in the self-diagnosis system of the vehicle electronics as the vehicle has no way to check the plausibility of the sensor values, but apparently their malfunction is the only sensor malfunction that can cause the engine switch off (source). Spare part cost for the sensor was just 40 EUR (source). The cost of figuring out the problem, if paid at commercial rates, had probably been 100 times that. Add to that the multiple parts that repair shops usually replace while looking for the issue (example, for the same symptoms) and it amounts to a total economic loss of the vehicle due to … a part that sells for 40 EUR here and is manufactured for maybe 5 EUR by our industrious Chinese friends. If that does not cause you nightmares, you’re living too long on this planet already!

Reports of electronics failure can be so unexplainable that we should accept the “ghost in a machine” hypothesis as the most likely. Or how do you explain this?

A long time ago, for example, I had a Lada Samara. Its engine always went out at a certain traffic light on my way to work when the traffic light was green. The engine only started again as soon as the traffic light showed red again. So, it was bad luck when I had to stop at this traffic light of all places. There were always few funny horn companies from the following motorists. My car workshop told me I’m crazy when I described the issue. But when I let the workshop foreman come along for a demonstration, they stopped laughing. (source, translated to English)

Oh, and I have one more like that, my personal favourite. A friend’s brother whose VW Touran diesel car did not start anymore. None of several workshops could figure out out, so he asked my friend to just sell it as broken. My friend takes it to his place but does not want to give up on it so easily. But can’t figure it out either. So he just leans on the car and prays for it. From right then and there, it started reliably again. They still sold it shortly afterwards, because, who knows how long that treatment lasts.

Even battle tanks, the most indestructible of all vehicles, are easily taken out of action nowadays by pulling on a cable or other electrical component. When I was in the military, I found a damage report in our tank unit of Leopard 2A5 main battle tanks. Somebody had stepped on something wrong upon leaving the tank through the turret hatch, and that broke one of the tank’s electronics boards. Repair costs were roughly 10,000 EUR in today’s money (I don’t remember exactly).

Well, sweet! If that isn’t what we want from technology, I don’t know. Those modern, electronic-filled, automobile shaped nightmares from above are however quite far off the mark. With all their absurdly cushioning comfort, they even fail in providing us with valuable human experience, as we shall see in a later piece. In other words, there is a good amount (but not complete) overlap between less wasteful car electronics and what car users need and sometimes demand.

But just how became cars such a nightmare? That’s a good question (and you’re welcome to join the discussion below). Here’s a very limited, mechanistic perspective: since new cars still last three years before the maintenance and repair nightmares begin, this fragile technology does not cause nightmares to the immediate, paying customers: those purchasing or leasing new cars, and switching them for another new one after one to a few years. Cars are made as impressive high-tech packages that last these first few years, often sold or rather leased as a mobile booster for social status, and directly fund automakers in that role. After that, automakers do not care, beyond making a mint of money from excessively priced spare parts and repairs. Second-hand owners care, though. The environment cares. Future people care about the wasteful practices of today.

That brings us to another good questions is: what can be done. I’ll start with a few ideas what can be done with technology, and you’re very welcome to add policy, sociological, business and metaphysical perspectives in the discussion below:

That’s enough of tech proposals, and surely better tech will not get us out of this nightmare alone. It rather seems to me that the whole value system of our current culture is at fault, enabling such a poor creation and experience as with today’s cars. For that, I leave you with a quote from "Zen and the Art of Motorcycle Maintenance” for now (actually the most-sold philosophy book of all time). We’ll explore the implications on cars in a future piece together.

“[J]ust stare at the machine. There’s nothing wrong with that. Just live with it for a while. Watch it the way you watch a line when fishing and before long, as sure as you live, you’ll get a little nibble, a little fact asking in a timid, humble way if you’re interested in it. That’s the way the world keeps on happening. Be interested in it.”

Great piece, @matthias! There are so many things to say that I do not know where to start.

I’ll start with this: vehicle longevity is certainly a super important factor in choosing your ride. I have been a motorcyclist for 25 years, and for 22 of those years I have ridden BMWs, which have a reputation for being indestructible. Back when I started, there was a rumor that “80% of all BMW bikes ever produced are still on the road”. That was probably a myth, but it was true that those machines were very reliable. Few people can “finish off” the engine of a BMW bike. Most motorcyclists ride only on weekends, fewer than 5,000 kms a year, and at that pace you could probably buy a BMW bike at 30 and ride it until you are 70. You, could, in fact, ride just the one good bike for your entire life.

Part of this longevity was the policy of keeping spare parts on the catalog for a long, long time. But, as electronics crept into the motorcycle world, I am not sure how they are going to keep doing that. Also, they now have to maintain the maintenance systems themselves: mechanics – even the very experienced ones – are now powerless without the (proprietary) software diagnostic tools, produced and maintained by the manufacturer. Will those tools still be maintained and backward-compatible? How long? Will mechanics in 2037 be able to look into the electronics of a 2005 bike?

Part of this longevity was the policy of keeping spare parts on the catalog for a long, long time.

Ah yes, of course! Spare parts availability is a great additional point. A closely related point that I should have mentioned in the list of possible improvements at the end of the article is: standardization. There’s just no better enabler of technological efficiency (and thus also, resource efficiency and resource protection) than standardization. If the most needed spare parts are all standard parts, manufacturers do not even have to care about stocking them. Like, how a few weeks ago I was able to buy steering rod dust caps for my 43 y/o oldtimer truck by buying new ones made for agricultural tractors. Measures had been standardized and were still the same after all that time.

Sadly, technology and especially automotive technology is moving away from standardized parts. They are not even standardized in the same vehicle anymore, due to all the unnecessary variants that one can order. In the story of the fog light repair related above, there had been 12 different variants of the broken onboard electricity control unit (another black box with electronics …) for the same model of car (source). Certainly these will not all be available for long. Imagine the opposite extreme, were all cars sold in the EU would share the same electronic boxes, just differing in their software content, and that software would be open source to guarantee its usefulness decades into the future.

Sadly, technology and especially automotive technology is moving away from standardized parts.

But what about the brands that have built a reputation of reliability, like Volvo in cars and BMW in motorcycles? They should have more of an incentive to keep spare parts available, because the beasts with 300K kilometers on their engines (and counting) are part of the myth.