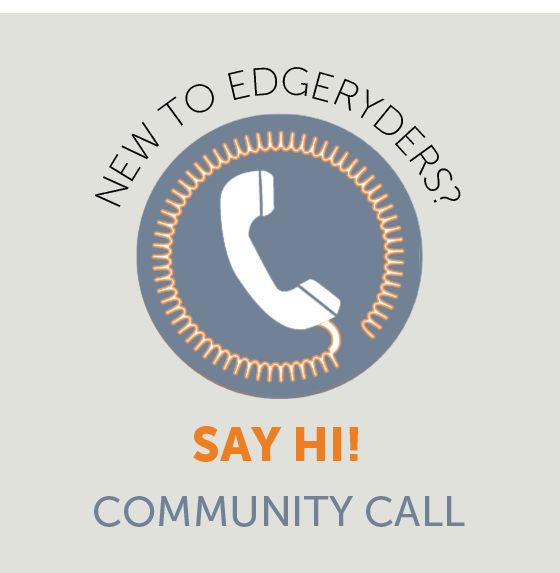 To all newcomers on Edgeryders, this is an opportunity for you to meet the community and get involved in different projects happening at the moment: Future Makers Nepal, Spot the Future Bucharest (upcoming) or community organised events.

We’re slowly but surely starting to build Living on the Edge #5, our yearly annual event. We start with a blank slate: “A lot remains unknown about where, when and how the event would look like, but that is always part of the work with Edgeryders” - Natalia’s call for this year’s team.

… here’s what we discussed at the last community call and where we are now.

If you want to propose something in this week’s call agenda, please leave a comment below.

See you Thursday morning at 11 cet on skype -> add @edgeryders and we’ll call everyone!

I may be late…

or womaning. or whatever. See you in 5

I’m from Mersin, Turkey. I would like to come and say hi, what is the last time (for which country’s time)

It will be great to have you,

The call will start at 11:30 Central European Time, I think this translates into 12:30 at noon in Turkey…

Dear all, could you please tell me the path of this skype call at 11,30 today. I mean i didn’t join to a web based skype call, i did it from my cell phone before,

just copy edgeryders in to the search area

You probably find it directly under your icon in the skype window. Does that help?

hi, added you and waiting for the call,

We’re talking about circular economy for an enabling environment but rather try to advance our niche (“edge” / avantgarde / ITC / …) interests. In Mersin and Europe as a whole, we are faced with the real issue of having to accommodate with a sudden and huge influx of people. It’s not that we, as the edgeryder community, can manage but we can participate and support in creating capacities within society. The ITC and open source sector must expand (not circulate) to create those capacities, just as the lemon business in Mersin must expand, for the local economy to be able to cope.

my take on relationship of ER to circular economy (…and ICT)

Not against you in any way - just an opportunity to think out loud - because I had the impression you were interested.

I think ER is very much aligned with (OS)CE and that is good. Linear economy kind of grew historically out of the industrial revolution(s - especially amplification of power through burning of fossil fuels), the topology and thinking of the industrial sector (esp in the “West”) is based on this linear/exponental(one way, always down stream) inspired mentality that developed in the last 2-300 years. ER thinks differently and thus can solve problems you can’t easily solve with “one way thinking tools”.

ICT is a special case in my opinion. Not in that it is different there but in that it is WORST there. Not in terms of the architecture we run (networks), but in the manufacturing. The supply chain is very sensitive (and not insignificant in size and complexity). But more importantly the externalities are gigantic. The energy for cooking that silicon and then processing it in 300 steps - not much of that lends itself well for CE. Recycle a chip? Have fun with that. Here we may actually need to stick with the linear approach for a while. But we could (and in my opinion should) design ICT hardware that lasts 100 years to ameliorate the problem. We could certainly reuse them. The other thing is that we should use it where is makes sense - not necessarily a smartphone in every 10 year old’s hands (or OLPC) every 3 years. Most electronic circuits need 80% of cost (energy) at production and 20% in use. A car for example is the other way around.

Thoughts and reflections (and Todo)

I liked the call very much and think it is time well spent. I did many telephone conferences before but they were more agenda driven, less flexible and not so much fun.

I’d think more people would be reached if one did not need exactly THAT slot of time for exactly THESE participants - but you could “connect with the conversation” after it is over as well. So recording it, then posting it and commenting (mentioning people) at certain times (important) to integrate it into the rest of the platform conversation would be cool. This caught me a ToDo where I’ll try to set this up. If anyone wants to help me it is appreciated cause I do it for the first time… Question is how we can easily have people comment on e.g. soundcloud - perhaps a shared account? And how public should it be? [edit: check out progress here]

I’ll have to think about how I most effectively throw in my ideas into the community. Images may help. Several layers of increasing detail perhaps. But I would also like to make many people look at it at the same time - so the chances for interaction (not only with me) are higher. Of course I need to remember that other people have important work to do and won’t be happy if I say: LOOK! NOW!

So how is this best resolved? I’ll think about that a little longer.

I had the feeling that I came across as a douche bag with regards to OSCE-days (perhaps also because lack of audio-feedback). I really did not mean to. I actually happily pushed the event announcements through my networks and know it went on at least one activist mailing list.

I would like to know more about this goal-setting thing @Nadia mentioned relatively early. I also wonder how many people share what concepts of thought (I want to avoid the phrase “world view” here), such as complicated vs complex, self organized criticality, linear growth vs percolation threshold, etc. Could nice names (narratives) be found for them so we have an easier time communicating important aspects (I think that is pretty important [edit: @ola - found your method-kit very cool!]). Example: Parkinson’s law (of triviality) vs bike shed and nuclear reactor (or “Vicious University Politics”). Perhaps one could extend the mention function to include those? A little like calling out fallacies to correct people on the interwebs. Is it worth the effort? Is it better to explain this (perhaps p2p)? Dunno. Just know I won’t integrate that.

A general comment on suggesting and then having to do it: This is a dynamic that is extremely common (perhaps for neurological reason as well) - BUT - 2 things:

[Exaggerating a little:] We could say any task should be done in pairs. (Even if they just agree between the two of them who will do it alone in the end.) One could say: by default the suggester is one of these two (not necessarily the lead). The other one can either be found through a member in the conversation, or be one of the members of the conversation. Just an idea. I want to think about making incentives for listening in to conversations a lot, so you can find mutually beneficial tasks more often (stuff they had to/want to do anyway) and match the right people. If participating and being there just lands you in a lot of extra work, people tend to quit when they can. Also we should try to keep work away from facilitators (includes note takers, and moderators) and spread it around very evenly. Perhaps also as some form of invitation. I know this is supposed to be a do-ocracy and I think that is extremely important. Is there a way we can foster that at the same time - so the stuff that is being done is also the right stuff? Please don’t be shy and comment critically!

Engagement and outreach for projects

So I think it is a combination of

Come to think of it, the above should probably go into some kind of “Building projects on Edgeryders” guide.

Your Mayor or mine?

:)) As the choir from some kind of sect next door gears up to full volume I am thoroughly enjoying this thread.

making the world less of a shitty place

well I have to say I enjoyed the call, although I participated only by text, going through a project in Mersin, Turkey for Syrian refugees, to the open source circular economy concept and how it could be developed, to the general abstract view of the core and the edge in terms of resources, money and doing good or making less shit  with the in between  ‘’ your mayor my mayor’’ talk.

This may be “old news” for you but I felt it would not hurt to put them here. A search for “percolation” on this site brought nothing up. The implications of it are pretty far-reaching in a social context and totally underexploited (except for the viral - thing). If anyone is bored I can also recommend the https://soundcloud.com/longnow talks. About half of them are worth most peoples time I’d say. I particularly like the one by Mazzucato,Kahnemann is alright, Doctorow def for techies, Negroponte so-so, but there is good stuff there.