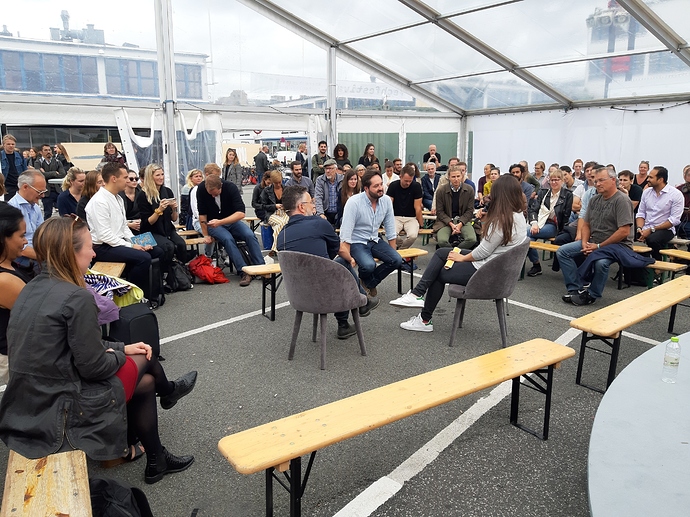 Photo credit: Screenshot of “The Frontiers of Impact Tech” report

Good news: The next decade will be fastest economic transition in history. The Momentum is there and humanity is good at rapid change when it has had a vision.

In china every week 5000 electric busses. Shenzen, in last 5 years has transitioned its’ entire bussfleet to electic busses. Next, they will be replacing the cars. The driver is that people do not want to live in polluted cities. In Norway 20% of all cars purchased in 2019 were electric cars.

This coincides with an exponential growth in adoption of alternative energy sources: much higher than has been predicted by the International Energy Agency:

Forecasts from the IEA are pulled from their World Energy Outlook (WEO) reports, which are published each year. Meanwhile, the “PV History” line above is the actual data for photovoltaic (PV) installations each year.

Second piece : that visual about exposnenental
Third: British politics. Even in this midle of this storm in june this year british govt created legislation to mget to 0 emitions by 2050. Even though cannot agree to leave EU. Cost of radical economic change is same as their previous investments, 1% of GDP of the UK. And that doesnt accunt for all bbenefits, health etc
(People do notSolar): Solar cell growth vs World energy outlook (weo)

Every child’s birthright is a stable resilient planet. That is now at risk.
Published paper- what is trajectory to stablise climate- carbon law I Rockstrom, Geffnery, Rogeli, Meinhausen Science 24 March 2017

HOW do transformations happen in society?
Transformations are usually result of combination of
Have movement
tipping point: fossil fuel costs, if we can get wind and solar, new tecknologies down to prces of old technologies. And

The next decade must be the fastest economic transition in history: this has to be the compass of all our careers and focus for next years

Benjamin: We need to achieve prosperity and achieve decarbonisation
Technology, policy, sustainable behaviour change at once and reinforce each other

Fossil feuls are in most of the proucts we use through platics: companies trying to replace petrochemical with mio based materials/ Mycelium mushrooms to replace packaginf

Food sector: How to reduce waste

Manuela - -Many if/challenges for those to work. Dangers attached to technolsolutionism.

How to start to push towards impact tech management

Need to slow down

Guy advising In shipping industry you can slow down carbon emissions by 20% if you slow down the speed by 12 Knots (check number). Example of chinese busses going faster, short sighted victory because china still largely running on carbon industry. You draw lithium from huge desert areas, impact of your lithium on the environment. With simple changes you can reduce carbon emissions.

Owen: on busses in chinaa - the transition from coal to renewables is happening much faster than you think - we can see that china is shifting its economy.

American guy : concerned citizen, find it very interesting how to create changes in the political systems.I come from texas where it is difficult to explain. How do we get this movement going? As an individual I feel lost to change the incentive from profit to wellness to everyone? Wes

Woman coming from oil and gas, decided to leave the industry but was asking what can you do? Ver hard to orient yourself, good lucky to run into the right person, a person who offered me a job in a company that was doing good things.
Investment into different kinds of people being different kinds of impacters?

Fredrich does stuff with food: am part of NGO trying to make foodtech accessible - foodstack. A question: How many in here would like to get hands on involved in something that creates a possible impact? (everyone) Alot of people want to do something, but not sure what. Then we turn to institutions and other org that are used to doing things for us. But this doesnt work - we need to. Automated vertical farming - solution is not perfect but we are getting close. Mushroom production.

We have had transition from healthy to unhealthy diets, we know the transition can happen very quickly. “Everyone wants to live healthier”.

Investment in the school system, what is similar thinking arount climate transition. Nordic secret - folkhogskola, personal and skill dvelopment - being able to have softer landing/transition. So people can become part of this transition, find their place - skillwise, livelihoodwise but also identify and social surroundings -building networks that see, sustain and reinform norms, culture and behaviours needed to move . Personal incubation and acceleration for climate transition.

Empowering people who can make solutions for themselves, unleashing creativity and ingenuity that is not about “high tech innovation”.

Key:
Feelings of sense of lack of control
Disinformation campaigns

Questions: what is different this time with the movement? because market forces are with us? were they before for other changes?

1 Like
List of NGI events 2019-2020-2021
OCI Lab -- Almost there!
Blog post for Edgeryders' work on climate
How can the Internet Help the Climate?
Draft Post: How to build an incubator for accessible environmental solutions?
If you were in Barcelona for a week who would you talk to about Earth OS related stuff?
MariaEuler March 9, 2020, 3:46pm #2

Weaving the threads of a deep green conversation