In search of a venue: La Serre 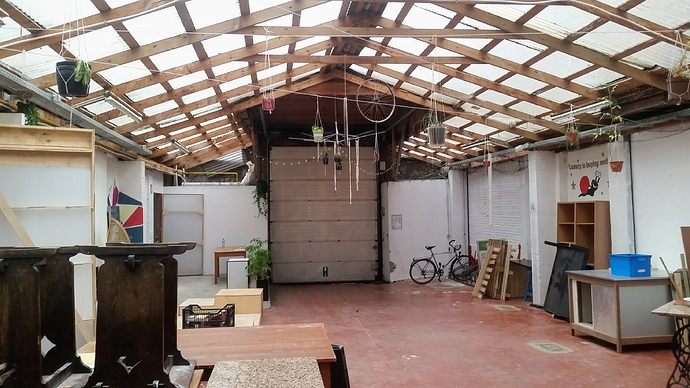 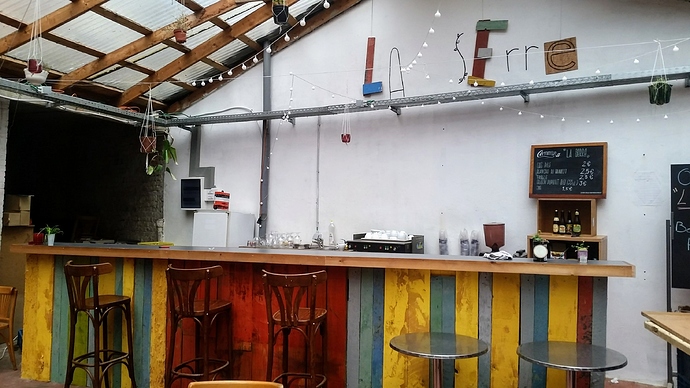 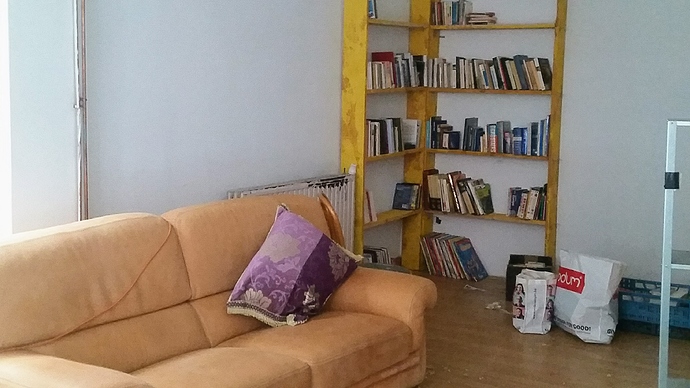 Hi everyone, I really liked this space I saw today - it’s in the making and diy mode, but will be more equipped by October. Let me know what you think:
It’s called La Serre (French for greenhouse), it’s located in Ixelles close to Place Flagey, and offers:

Ups:
-bright and good spirited
-purposed for community usage, looks quite flexible
-we can get help for the bar & kitchen from community groups in Brussels attached already to run activities here, so we’d be supporting projects for social good
-we can use the kitchen for cooking together in one meal at least; in general, we would be buying services from food groups (buffet style)
-we can keep the doors open to the event for interested passers by

Downsides:
-no Internet connectivity planned, so we’ll probably need to get it wired up
-in this space, I would keep the number of participants at max 80 to manage the 3 rooms. Two are quite small…

Most importantly: La Serre is one of the community spaces stewarded by an organisation we like in Brussels called [Communa ASBL]
(http://communaasbl.wixsite.com/asbl) (a non profit association). For the past 4 years they have been taking over unused spaces in town (ex through agreement with the City authorities) and have revitalized and repurposed them for affordable use by citizens and collectives doing good work.

Communa is a version of OpenVillage that Edgeryders is contemplating, but the network of spaces works in Brussels only. Here’s how: their collective started out as circa 20 people living together and trying to make ends meet as students, using the space they had back then in productive ways (from what I understood, it was a squat). Once they learned how to do it, a subset of the group gradually took over other places in the city, and professionalized themselves in a broad range of skills: from the legal aspects of taking spaces, to equipping them, .
We stand to learn from them because they too, are on a quest to building living and working spaces for communities which thrive.

What do people think?

@matthias, @johncoate and other handy people in the community: how feasible do you think it is to wire up the place with Internet the days before the event?!

Works for me. Nice find!

Great, very happy it is actually such a nice space, and the people are like minded. And looks pretty, my kind of spot. Let’s see, there are one or two more that I think could be as great as this one, and then we pick. Thanks for sharing the documentation as well

Agree with Matt. I couldn’t have said it better. As usual.

I thought so, thanks Matt. They have Internet in their offices upstairs, will check about the speed. The only thing is they are not fond of having it running in the whole space anyway (people hanging during regular activities and being on their phones all the time), so while we can probably get it for the days the routers will stay with us.

That looks great! I like that we’re supporting local organisations.

What do you mean by the “toilet using a water tank”?

We would need to communicate beforehand that some sessions will have limited spots due to space restrictions. Not a big fan of that, also because it strains flexibility in the program. We often have three parallel sessions running, which puts us at maximum capacity of the space, without room for chilling or random things.

Ok guys, so here’s my plan so far:

We rent La Serre for 3 days and make do with what we have - ask people to be considerate of the time and space, not take it personal if they get assigned to the smaller rooms and not keep busy the small rooms more than for the sessions allocated.

We have lunches there every day and dinner during the evening of Day 1.
We have an organised dinner elsewhere on Day 2 (safe to say we might do it in a Temple

We have an organised dinner elsewhere + PARTY on Day 3 (@Yannick can you help get the industrial space we talked about - in Anderlecht was it?)

Some of the costs are offset by Edgeryders, some of the food is paid by participants themselves.
More on the budget soon.

@noemi this is the place i was talking about: https://www.facebook.com/studiocitygate/

Looks great to me! I would wait until @natalia_skoczylas is in Brussels so she can check it out too… I believe this is sometime mid September?

Yes it is, still hunting for the right ticket as they’;re bloody expensive and mostly very long connections

Hello! @natalia_skoczylas @noemi or anyone else familiar with the venue!

@matteo are hoping to involve an end user in their presentation who is in a wheelchair. Do you know if the venue is wheelchair accessible? Wheelchair measures 132 cm x 75 cm

Hi all, I saw your pings on multiple Channels, give us 24 hrs to respond pls

Will be posting updates later this week if all sorts out.

One solution is for you to change the session for day 1, if people would like to join for only a day.
Sorry about this, juggling multiple demands

@gehan Let us know when is the session - I guess we could bring the person and the wheelchair there if we could carry them - not sure if that sounds correct, damn, I hope I am not offending anyone

if that would work, we could do it the ‘old’ way.

The session is on Day 2- Policy Redesigned, in the morning.

Perhaps that might be down to how comfortable @matteo and Milan partners feel about asking the individual… : /