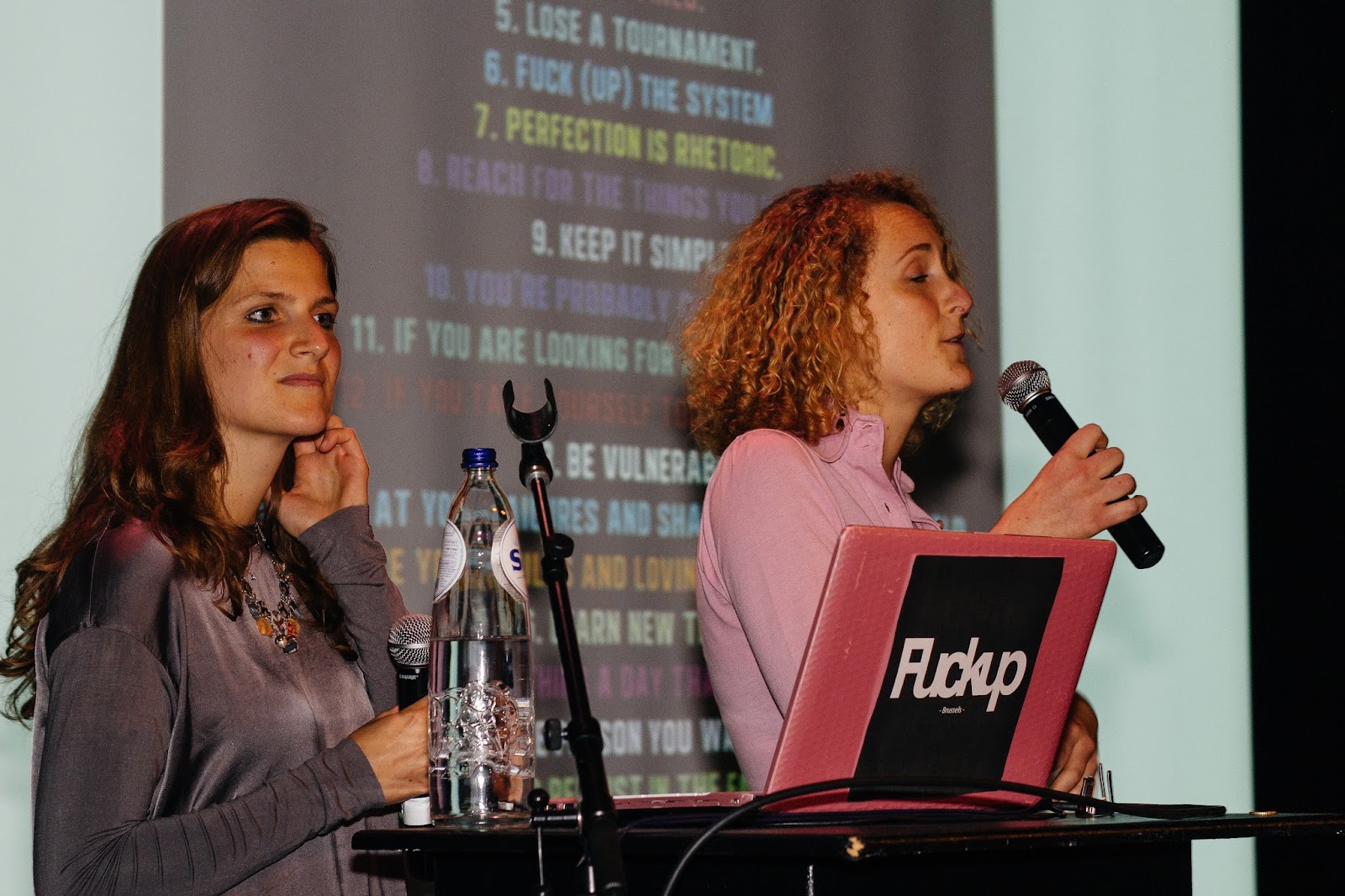 A two-(wo)men organisation based in Brussels. We function just like a consultancy, except that we make pretty strange recommendations. You see, we commit ourselves to the art of being wrong and of openly talking about failure. We create environments, conditions, mindsets and tools for you to share your failures and proactively learn from them. Meaning your own failures, those of others and those that you like to blame on others (because you do, we’ve got science proving it ;))

We’d like some drum rolls for the following announcement…

We are proposing BRUSSELS to be the host of LOTE#5 and to focus the event on FAILURE!

First, let’s talk about Brussels a bit. We understand and appreciate that you may think of our city as the most boring place in Europe. But it’s not. Admittedly, the weather sucks most of the time and there is a neighborhood filled with Eurocrats with big pockets and not enough urgency. That’s just one neighborhood though, zooming out, you will see a very strange city. Only 1 million inhabitants, but due to all the immigration we are coping with a giant variety in cultures one of the largest rich-poor gaps in Europe. On these edges where rich and poor and a plurality of identities are meeting, very interesting projects are brewing. Sometimes literally, as there are many projects on beer.

Now that we know why Brussels is cool, let’s talk about having failure as a theme. Or not necessarily as a theme, but as a guideline. Why are we so convinced this is a good idea?

Because we’ve been working with this theme for a year and, aside from a number of fuckups which you can read about in our freezer, this is what has come out of  it:

The skills we’ve been working are: how to decouple your ideas from your ego, how to admit defeat, how to replace blame with accountability, how to not judge failure, how to ask for help,… These skills are needed to be a resilient entrepreneur, but if you think about it, they are also really necessary to allow a multicultural society to flourish and to get a good implementation of participative decision making.

if we think back of the challenges of Brussels, with its wonderful but dysfunctional multiculturality and its not-so-developed participatory democracy, the conclusion is that we need you.

We don’t just propose, we need LOTE#5 to be in Brussels.

So what do you think? Want to come ride on our edge for a bit?

6 Likes
About the LOTE5 “Fail / Unfail” category
Create the 2015-06-09 newsletter
Towards LOTE5: two great proposals and a problem. How do we move forward?
Writers’ Workshop: Reflecting on A Really Long Day
Doubt is the first step to believe
Cooking & projects talk @ NGO hub
trythis July 31, 2017, 6:38pm #2

Thanks for the proposal. Now I’m torn. How many votes do we get again?

Ah yes, learning to fail better - it’ll be the new “soft skills” it seems to me…

That’s what this Project Freezer is for. Antiheroes has existed since May 2014. So far, we haven’t engaged in any project ideas that in retrospect were entirely foolish. We have, however, spent time on ideas that we after a couple of weeks decided to put in our so-called freezer, because we came to the realization that under circumstances it didn’t make sense to spent more time on them.

That’s eating your own dogfood, very brave! And particularly on crowdfunding:

You cannot create a comprehensive crowdfunding campaign in a short delay, you need to wait till you are ready and not speed up the process because of an external deadline.

cc @oana.toiu and @Alex_Stef who have in the pipeline a wonderful conversation along the same lines… Ifail.ro looking forward to it!

As for our yearly Living on the Edge event in BXL, I’m all in for yours and other proposals I’ve seen because commitment is key… but curious to hear others.

Dying to attend a FUN

'We’ve come up with a business model centered around failure.

Great opener. Speaking about failure is starting to happen beyond friend circles in Romania, as well, and as Noemi was saying, we’d love to encourage that boldness and keep it an open conversation. We were sketching an #iFail local conference, and now I’m thinking that hosting some FUN in Bucharest would be a great way to start the sharing. Yours look awesome, congrats -  might be asking for pointers soon.

One of us will be in Bucharest

at the end of this month, so we can talk about FUN in person!

so looking forward to it, Irene!

When the dogfood is tasty

Then why not go for it?

Really, we’ve noticed that having the freezer on our website together with our list of resources gives us tons of credibility. Although it keeps being a tricky excercise to evaluate oneself.

If you want to talk more about how not to crowdfund, drop a line!

You know these people, right? http://www.jnegres.org/

If not, perhaps you wanna compare notes some day…

but they sure look awesome. This movement has been necessary in academics for a while now. Thank you for the tip!

I can testify to the impressive traction of FUN Brussels. Kira and Irene are lovely people, and they are having some well-deserved success. They have a venue, sponsors, volunteers; the place is always packed, like at the concert of an up-and-coming band that will probably get famous next year and has already been discovered by a small host of early adopters; the stories have been funny, inspiring and deeply human.  @Thomas_Goorden delivered, I have to say, one of the best.

And we have plenty of failures to chew on… maybe the time has come.

You made me think…

about failure and how I deal with it in my daily life. To be honest, living in London for the past 3 years doesn’t quite help. People here tend not to talk about fuck-ups and when they do they either take the blame on themselves or put it on others and they urgently try to find for a cover. But that’s not the point I guess… I truly believe there are things to take out of failures and I’d love to hear how other people deal with them, listen to their failure stories and of course I’ d be up for a FUN in BXL or anywhere else.

There are FuckUp Nights in London too

but you are welcome to join our season finale next week if you find a good train deal!

How can I find them?

(the FUN in London). are they on Eventbrite? who’s organising them? I could probably get in touch with them and find out more. Unfortunately I couldnt make it for Brussels…

I believe they are organized by HUB Kings Cross

This is a timely and relevant proposal. Realise how much this is needed after the futuremakers conversations in Cairo. I went to one of the fuck up nights some time ago and very much appreciated it for two reasons. The first is the diversity- people from very different walks of life sharing hard learned lessons about what went wrong, how as well as how they were moving on or trying to fix them. Things like dealing with the practical and psychological consequences of bankruptcy, how people go about rebuilding shattered reputations and self confidence. Across the board- activists, entrepreneurs, consultants, political campaigners etc. I felt I learned a lot about very different lines of work and sectors, and societies, in a short time. This is well aligned with what I believe is something we do very well in Edgeryders- building spaces where peeople from very different contexts can engage in respectful, mutually generative exchange that helps us all level up.

The second thing I appreciated is the high quality of content and organisation, including preparation and communication efforts. FUCKup. In LOTE4 we crossed a threshold. The case study adventures, the curators, and the report on Stewardship. A similar process around failure could generate something really really interesting.

Edgeryders has a base in Brussels where we can host a few guests, and I doubt it would be difficult to source venues etc. Plus the city is easy and cheap to get to from a lot of places e.g. by Bla bla cars.

This sound like so much fun! Could we have it in Marrakech though? I’m still working on the proposal(and i’m no longer alone!) but I just loved this topic so what if we take this out of your comfort zone and bring it to sunny Marrakech where there is so much happening, there is a large choice of very special venues(ancient riads, gardens, mountain refuges, etc), travel is cheap from all over Europe and it’s only 3 hours away.

I just talked to Hana, the founder of Priscilla Queen of Medina which is an artistic residence and Performance/Event Space based in the Marrakech Medina and she is interested and willing to help us make this happen! She will register and introduce herself shortly on the platform.

We could also go to the High Atlas mountains(some 50km away from Marrakech) and see how people manage to live with very limited resources and help them find solutions to their problems(education - the lack of schools and quality teachers, improving women’s working conditions, etc)  and cook our food with locals, have tons of mint tea and enjoy the breathtaking landscapes. Norddine my husband could take us there as he is a mountain guide and has a project teaching the local kids mountain biking and sandboarding.

On the crossroad of cultures and civilizations I see Edgeryders fitting very well in the local scene of start up and community-based projects that would benefit greatly from the event and we could start growing our Moroccan community of future makers!

First of all: awesome approach @ireinga! I actually would love to start organizing some fuck-up nights in Tbilisi as well, though I would def need to have some more insights (experience?) in what it actually entails = attending it myself.

But if I would have to choose between Brussels and Marrakesh (or any other place in Morocco for that matter), I would prefer sunny days instead of rainy ;). But having lived in Brussels for a year and never having been to Morocco may make me slightly biased…

This thread just keeps on getting better and better.

The past two LOTE events have taken place where we were building a project and I think this is an important factor- that we do events as part of series of activities that begin before we get to the venue, and continue after we leave. Perhaps we could tied this to the futuremakers work: a chapter on failure in the book on networked collaboration?

Where there is a will, and enough people working together, there is usually a way(s).

Just came across this website  and thought it’s kind of relevant to what the girls do.