Collective intelligence in Edgeryders: the big picture, seven years on

Seven years ago, we started using an Internet platform to discuss system-wide issues that we found relevant. The idea was to welcome everyone to the conversation, but curate it so that it would be truth-oriented and respectful. The years went by, and the community got involved in more projects. More and more people joined in, more ideas were suggested and troubleshot, and all of it stayed on the various iteration of the platform, as a sort of collective memory.

I like to think of online communities like Edgeryders as engines of knowledge and information processing. Questions and data go in, some kind of response comes out that was not obvious by looking at the input. This is functionally not so different from pattern-reading in large masses of data by algorithms (“artificial intelligence”). But of course, the differences are there. The three most important ones:

The whole process works by facilitating interaction. The Edgeryders forum puts people within line of sight of each other, and tries to increase their interactions with one another. As they interact, they uncover and quesiton assumptions, compare notes, detect patterns and regularities. Collective intelligence is interactional, not additive.

What do people think? @soenke, is this close to what you mean by “collective intelligence”?

The beauty of this process is that you can visualize it as a network of interaction. Indeed, this is what I want to do here.

But first, a few numbers. At the time of writing, the Edgeryders platform has just over 5,000 registered accounts. Of these accounts, 1,524 contributed content, authoring almost 50,000 posts in 8,000 topics, for a total of 6.7 million words, mostly in English (for reference, that’s 15 books the size of Tolkien’s The Lord of the Rings). The unique pairwise interactions – of the form “Alice replies to Bob”, where the pair “Alice and Bob” is counted as 1 even if Alice replied many times to Bob’s content: for simplicity, we can think of them as “relationships” – are over 7,000

And here it is: 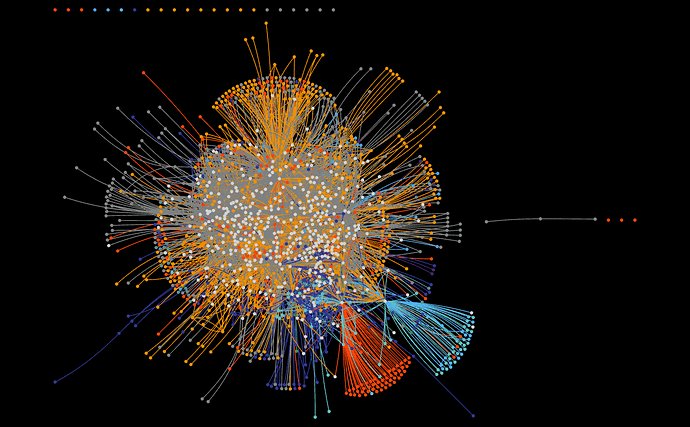 This graph re-uses the platform’s categories color scheme (you can can see it in the home page. Red stands for #campfire, orange for #workspaces and so on. The graph’s edges take on the color of the category that the exchange their represent took place in. If Alice replied to Bob in the #campfire category, the edge connecting Alice to Bob is drawn in red. As for the nodes, those that are only active in one category also on the color of that category. Those that are active in more than one category are drawn in white. They serve a very important function: connect the different conversations happening around the various projects in Edgeryders, and transport information across them. There are many of them, 458, and this makes this interaction network quite cohesive. Many people could become inactive, and still the different parts of Edgeryders would maintain communication.

But the individual projects in Edgeryders are themselves quite cohesive. For example, the #ioh project’s nodes and edges are not randomly distributed across the graph, but tend to radiate out from its center to its southeast: 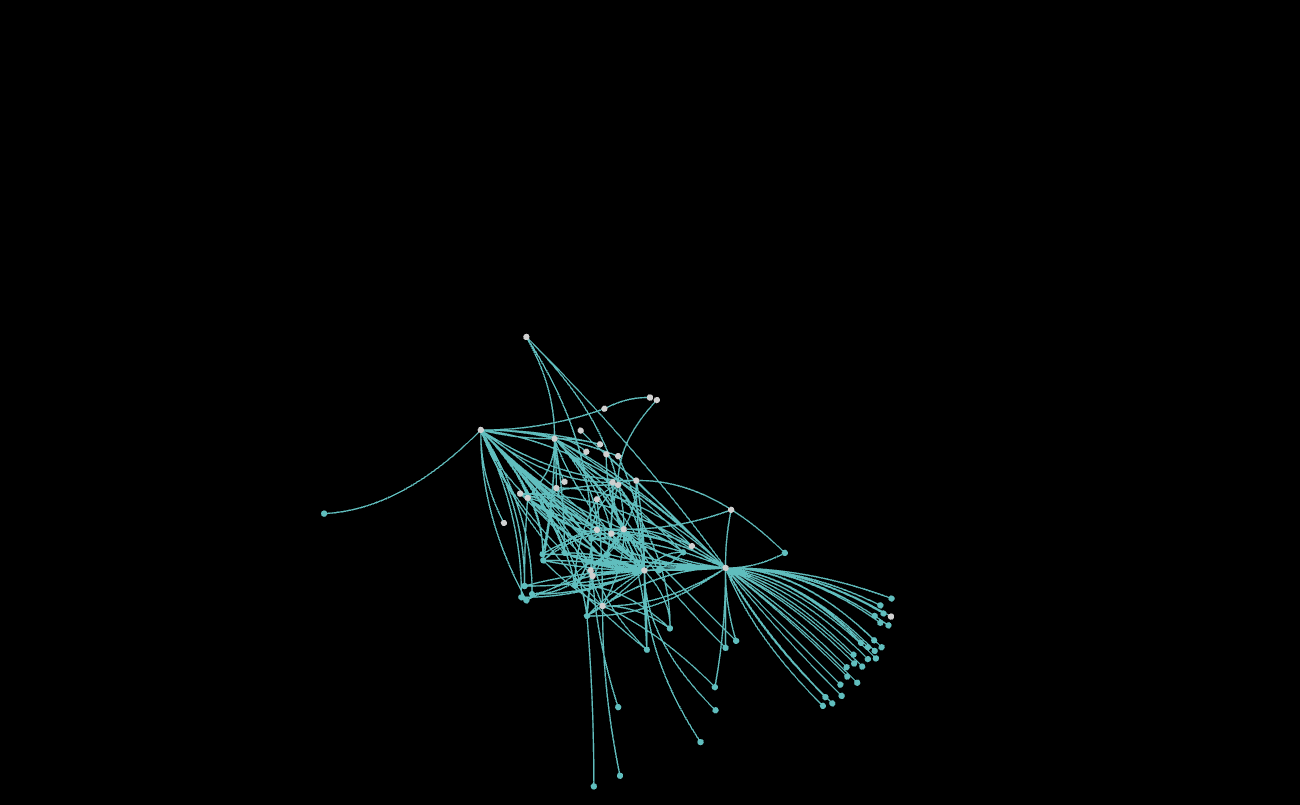 The (much larger, for now) #openvillage project lives radiates instead to the south and southwest: 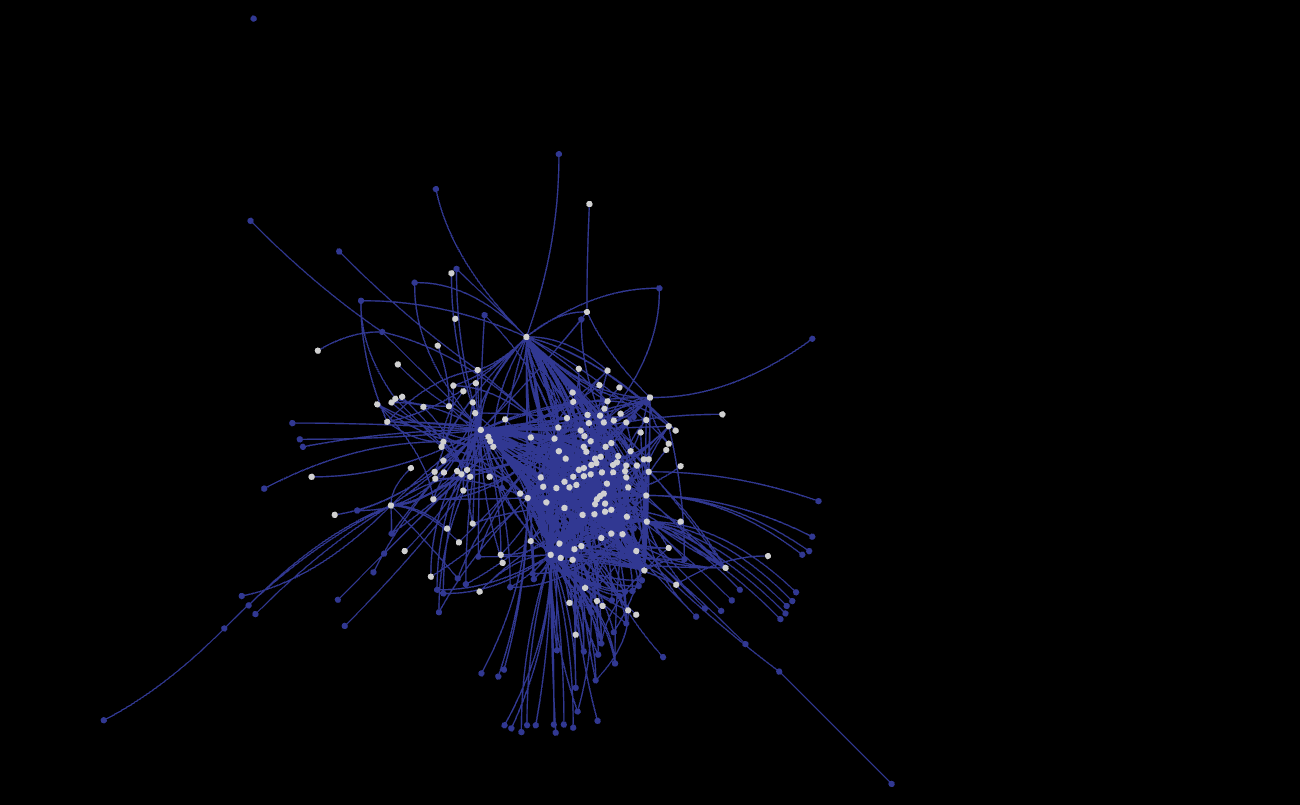 Most white nodes, of course, tend to live in the center of the graph. They ensure redundant connectivity between the project. “Specialist” blue, green or orange nodes are only participating in one project. They tend to have fewer connections, and the rendering algorithm places them at the periphery of the graph.

In general, I think we have what looks a fairly balanced collective intelligence engine here. New project are launched all the time. They maintain their own structural cohesion, and this means you can participate in them without necessarily having to interact with the whole Edgeryders community. At the same time, a large minority of participants in Edgeryders do participate in more than one project. In so doing, they bring to the new ones the memory of the older ones. They can avoid duplication by pointing out to older content that is relevant to the newer context, and to their authors, who can then be invited to join the new project.

Additionally, the conversation network is quite cohesive. You could delete the most connected nodes: the result would the disconnection of some peripheral nodes, but the final result would look much like the original graph.

Side note: now that we’re on Discourse, these graphs miss out a few reply-to connections that happen by quoting another user. That’s what Discourse encourages people to do rather than writing multiple posts that reply to one post each.

At this stage, it won’t change much, but could be a relevant addition for the future of our social network analysis.

Indeed, Matt. It should be fairly simple to add some code that looks for the @character in the raw text.

@anon82932460, in general items on the company blog (https://edgeryders.eu/tags/blog?view=topic-preview) are good material to push out. Do you want to try to push this one, too?

It should be fairly simple to add some code that looks for the @ character in the raw text.

Ah right, you can count mentions as well for the pairwise interactions. (I was referring to quotes, like the quote above.)

In practice, I don’t think the picture will change a lot, at least in this high-level view with 50K posts giving rise to 7K pairwise interactions. But you don’t know until you’ve done it!

Hi @alberto, there’s a lot here, but in a quick response, I wonder what the implications of this are: “Collective intelligence is powered by humans instead of machines.” Yes and no. Since the plasticity of machine intelligence is on the horizon, researchers like Catherine Malabou or N. Katherine Hayles already suggest that to engage such hybrid forms of collectivity we make intelligence an object of (philosophical) inquiry again. If nothing else, to be in a position to anticipate what all of that might mean for the ways in which we organize life and labor, a bit like @RobvanKranenburg’s “pragmatic cybernetics”. The machine is there, and while the technical object is becoming more and more elusive in its distribution, it materially shapes how we relate. So how do we position ourselves - in relation to an emerging ethics-and-ai framework, for example, that may well become a global regulatory standard (just like GDPR)? This is probably not a very actionable answer, but it is because I think the potential stakes of these devs are so unclear (at least to me, with a humanities background) that I see the need to engage with them in a practical manner, through experiment, prototyping, all of which are indeed about sense-making. And, in the end, about the (systemic) intelligence of whatever we build.

Oh, I am just referring to this kind of collective intelligence, the one embedded into human many-to-many conversations. I would never claim it is the only kind thereof. For example, there is a solid argument for markets to also be defined as collective intelligent institutions: they are computational devices, that aggregate preferences to decide the price of cabbages or copper. They are also mostly powered by humans.