Can Science Fiction Save the World?

Societies strive to produce what they perceive as valuable.

Our own only perceives what can be traded on markets as valuable. As a result, we strive to produce cars, phones, and financial derivatives. But we don’t strive to ensure biodiversity, clean air, and social inclusion. Contemporary economics has produced a way of thinking underwriting the above mentioned issues. From being reduced to a sad, uninspiring numbers game — 1% deficit less here, 1% growth there — it has lost the blue-sky radicality of Marx and Keynes, and the audacity of Fourier, Owens and Olivetti. This has lead us a downward, rather than a forward, path.

“The climate crisis is not there because people are evil or because people are stupid and don’t really see what’s happening. The climate crisis is here because it is profitable.” Alberto Cottica, Co-founder and research director at Edgeryders, explains that the current system of economic thinking is broken, and both economists in high places of power, as well as academics, haven’t been able to make a difference:

“Economics, as we know it currently, has pivoted from being a place where you could imagine, to a discipline which re-enforces and improves itself in a single model,” explains @alberto.

When economists started gaining power — from becoming ministers to serving in senior posts in international institutions like the World Bank and the International Monetary Fund — they had to underwrite the system already in place in exchange for the power.

“Since I started my studies more than 30 years ago, we are left with a very narrow range of economic systems that current economics can expose. It’s become impossible to think about any alternative, any radical alternative organization of our economies,” says Alberto.

In academia, a similar problem has arisen. Researchers looking to make a career in academia need to be published in well-known journals, discussing topics already part of the academic debate. Economics doesn’t allow you to stray too far, Alberto explains. “It’s a kind of risky proposition to shift the academic debate and it doesn’t make sense for a researcher striving to get tenure and to get a job to do that.”

Alberto decided to study economics thirty years ago, because he had the desire to change society and influence policy. “I became an economist because I wanted to understand what was wrong in society and improve the way we all live together,” says Alberto.

It’s the same reason why he started the well-known and politically engaged Italian rock band, Modena City Ramblers: he wanted to contribute to a national debate, influence how people think and what they are trying to achieve together. It’s for that same reason he decided to co-found Edgeryders, to try and make a difference in the world, running a post-capitalist enterprise working with a community of thinkers, economists, activists, doers, and makers.

When economists and academics can’t dream up a new, plausible, economic system to help us divert the crisis we are in, who can?

Alberto has been looking for a solution to our economic systems for the past three decades, disillusioned by the inability of current economic systems to improve the lives of people. How can we find new approaches to rebuilding our societies, combining how humans interact, live collectively and make collective choices about their lives?

It is clear we are at a crossroads of change. From the Extinction Rebellion movement, to Facebook’s Mark Zuckerberg being grilled in the US congress for the platforms gross violations of people’s privacy, to it’s unstoppable spreading of disinformation.

Right now, together with the Edgeryders community, he’s set his eyes on science fiction as a tool to radically rethink our economy.

“Science fiction is an intellectual exercise. A good SF author turns the fabric of society in his or her head, with a scientist’s curiosity. What happens if I pull a specific thread? For example: what if progress in medicine and biotech made extreme longevity possible, but only for the very rich?” explains Alberto, adding that science fiction authors have been creating fictional economies that aren’t real, but plausible — doing exactly what economics itself is no longer doing.

A few science fiction authors have created fictional economies, which are completely different from the one we have, while also being based on economic thinking. Some of them will be viable, Alberto says, some of them won’t, and some of them wouldn’t even be desirable (like the capitalism-gone-rogue worlds of many cyberpunk novels).

In the first, Doctorow describes a world in which people hack hardware, business-models, to discover ways of staying alive and happy even when the economy is failing them.

In Walkaway, the author dives into a world of non-work, ruined by human-created climate change and pollution, where people are under surveillance and ruled over by a mega-rich elite. The main characters decide that they have nothing to lose by turning their backs and walking away from the everyday world or "default reality." Through open source technologies such as 3D printing – and especially the ability to use these to fabricate even better fabricators – and with machines that can search for and reprocess waste or discarded materials, they no longer have need of Default for the basic essentials of life, such as food, clothing and shelter. This gives rise to a “dual economy”, with two co-existing economic systems: Default runs capitalism, Walkaway runs a sort of commons-based peer production.

Doctorow is one of the speakers at the first Sci-Fi Economics Lab event Edgeryders is organizing in Brussels on November 11th. The event will consist of four parts: a double keynote lecture – which will also be live-streamed; Reclaiming Utopia, a workshop where you can learn how to mobilize yourself for a more humane, fairer, greener economy, in collaboration with Extinction Rebellion; a party, because “if we can’t dance, we don’t want your alt-economy;” and a brainstorming session to create abstracts for contributions to economic theory and economic policy underpinning fictional economies.

“Basically, what we are trying to do from a societal point of view, is to build a range of alternatives that society could choose from. Maybe we want to keep the present system, but we shouldn’t keep the economic system because we can’t think of a better one,” says Alberto

The event is taking place in Brussels, as it’s the capital of Europe where “we can multiply the impact of a shift in thinking”

The keynote lecture is going to be chaired by Kirsten Dunlop, CEO of EIT Climate-KIC — the European Union’s largest agency, funding climate innovation. “We want to generate a fresh kind of thinking, which we can share with the public, the public authorities, the public powers.” Alberto adds. “If we can show to economists and to science fiction authors the interest of the public powers, then we can incentivize them to do more work in this area.”

But we cannot do it without your support!

Help us with our crowdfunding campaign, choose your pledge and receive the ticket plus goodies for the Brussels 11th event: 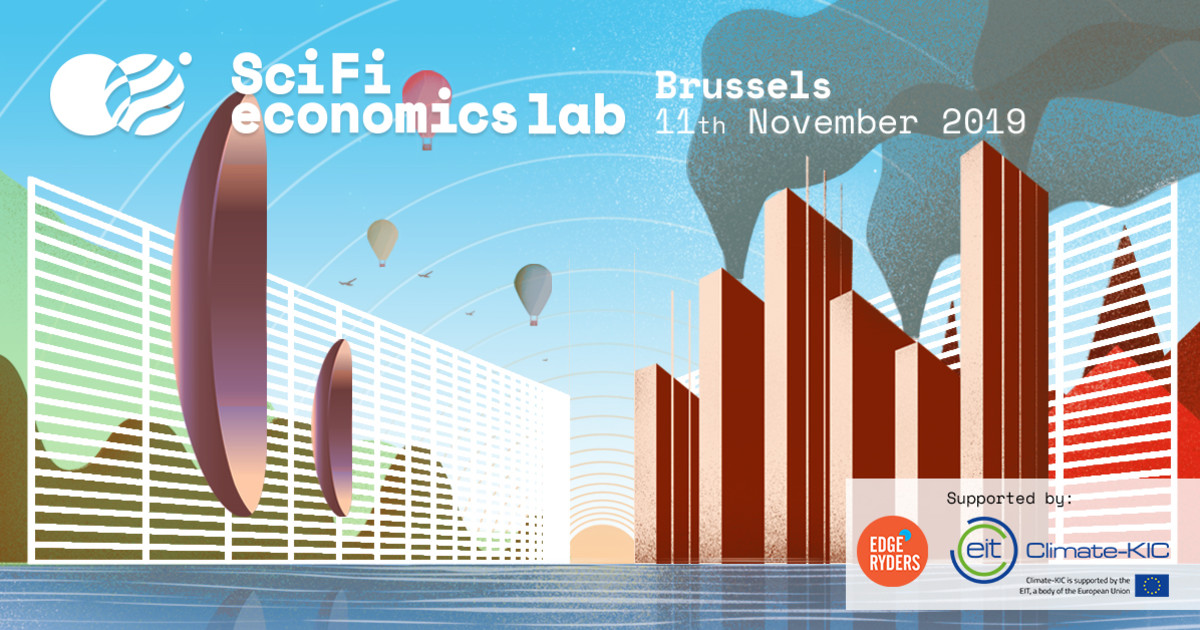 You cannot make it to Brussels?

You can still support the project, and gain access to the live streaming of the event!

We also commit to document the brainstorming session to write Sci-FI Economics papers, and share the documentation with you.

And finally, we are Edgeryders: working together remotely is what we do. By supporting us, you gain a seat at the table of how we develop the Science Fiction Economics Lab into 2020 and beyond.**

@alberto Did you read Neal S’s Fall (or Dodge in Hell) yet?? I have to say I preferred Doctorow taking it all the way back (to new bodies) better… even if that makes less sense economically!

No! But it is on my list. I was hoping for the ebook’s price to go down a bit.

2 Likes
Content Curation Call (5 November) at 16.00 CET on ZOOM
Moving all interaction and coordination for outreach and engagement to our workspace here.
November November November Creeps forth at this petty pace?
Jorge November 3, 2019, 3:19pm #4

I hope to come from Berlin! And happy to help out - set up, check in, etc.

Also, if you know someone that can host me for one or two nights, also appreciated