Water fountains- a deal between communities and the environment 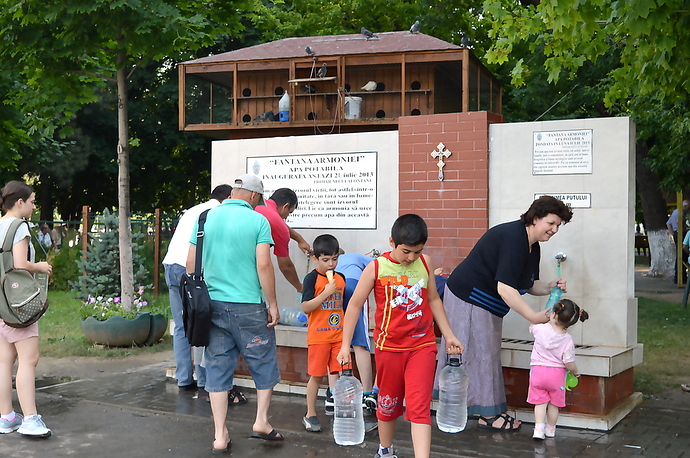 At Obor Square, in a small park near the eponymous Metro station in Bucharest, there is a fountain where people are standing in line for water. In cities, water management raises a number of issues, one being truly essential: potable water. It is vital, yet we only have it because we pay for it.

Drinking water should not depend on a person’s financial resources, but should be accessible to every member of the community. Moreover, the idea of public water sources would significantly reduce pollution from the excessive use of plastic bottles.

Miliția Spirituală is an NGO and human rights organization - a watchdog of political actors in Romania - focused on activities like community organizing and youth public involvement. They came up with an advocacy project to convince the city hall to install public water sources in the city. From the research done so far, they have found that there are only 49 water fountains left in Bucharest - which means there is one for every 50.000 citizens. If we compare it to a city like Rome, which has about the same number of citizens as Bucharest and over 2.000 working water fountains serving locals and visitors for hundreds of years, we clearly see the difference. Miliția’s goal is to create a network of NGOs that provide practical solutions for easing access to public water.

I personally think that the city should be more people-oriented and friendly for everyone who lives in it, that is why I asked Alexandru Predoiu, member of the Miliția Spirituală to give us insights on their idea.

What made you start this initiative?

“The idea for the water fountains project came during one of the workshops in our yearly activist camp. I was presenting a cause I would like to fight for and the issue of free drinking water for all human beings is an issue which I consider vital for my generation and for those to come. As the workshop progressed, we started asking more questions and thought of the necessary tactics to solve such an issue in our own community first, and by the end we concluded that water fountains would partially fix the problem.“ 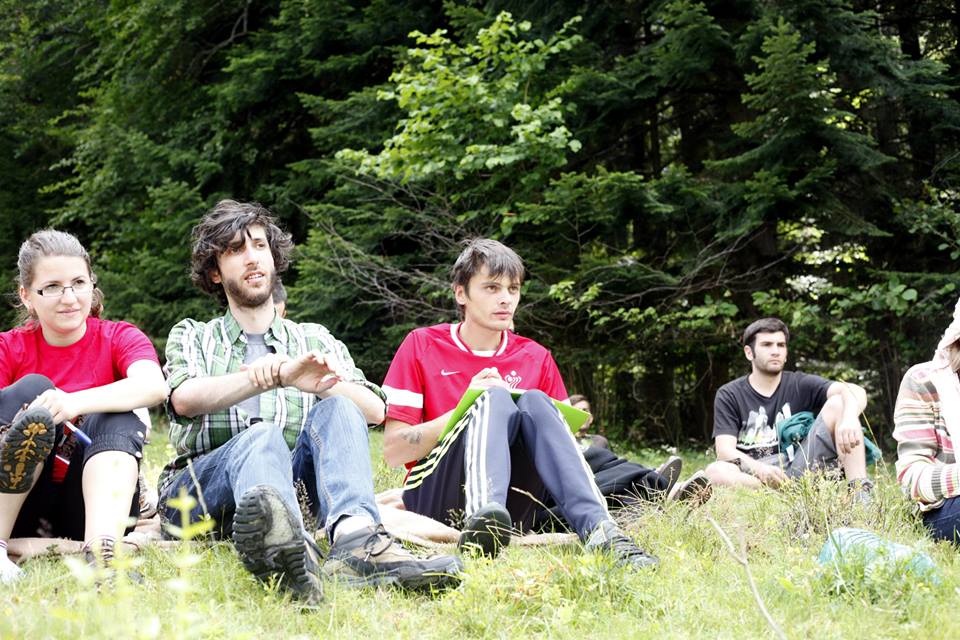 Why now? Does it affect you?

“I see the lack of access to drinkable water as a problem which affects large parts of the global population in one way or another, and as we have come to a historical point where we do have the necessary technology and resources to resolve such urgent and vital issues, we only need to build up bridges of solidarity and will. Solidarity from the people from parts of the world which are not directly affected and the will of the ones who are experiencing such shortages.’’

What’s the purpose? Is this something you can solve?

“The project is an advocacy campaign focused on Bucharest, which seeks to convince the municipality (the mayor and the councilors) to construct a public network of water fountains throughout the city in order to provide free drinkable water for all residents and tourists. If we achieve this, we will ensure that even underprivileged people living within the city have free and safe sources of drinkable water at their disposal.’’

Releasing the Earth, a little bit, from unnecessary weight

“The studies from our initial research confirmed that, by placing numerous water fountains in a city, it slowly reduces the use of plastic bottles, thus having a positive impact on the local environment. If we take that principle further, we can analyse how reducing the consumption of plastic bottles also reduces the carbon footprint of the city. It’s about building a sustainable and friendly city for people, as we are the ones destined to live in it.

The city hall is expected to support the entire cost of this project - we estimate it at 5 - 10 million euros. If they refuse it on the grounds that they do not have the necessary budget, we already have people from other organisations supporting the project who pledged that they will write the application for the municipality to get the needed funds from EU programs.’’ 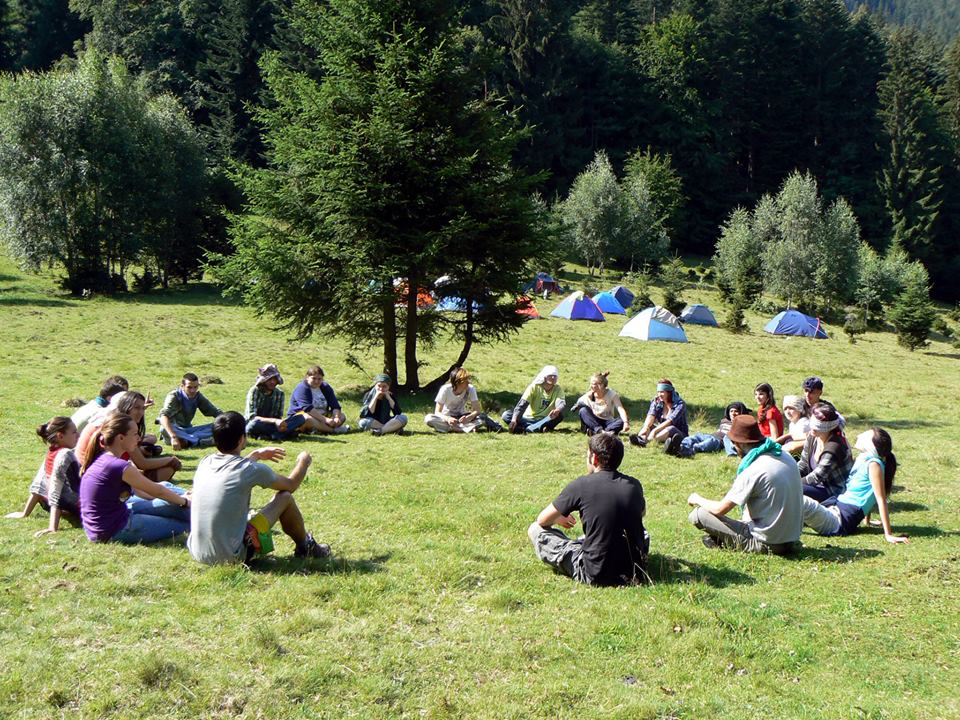 “We are in the early stages, as we are currently awaiting an official answer from a funding program, but we have already had initial talks with other NGOs who will support us throughout the campaign. We have decided to start it this week with by launching a press release indicating our intentions. The campaign has activities designed to gather support for this proposal  and since it is an advocacy campaign, it will focus on research, public meetings with informal groups, citizen initiatives and regular citizens, representatives of interested public institutions, signing a petition and so on. We will raise support, do the homework of the town hall officials and put pressure or convince them that it is a useful project.’’

“Regarding the possible obstacles we might be facing in our campaign, I guess there are two main ones. First, the lack of resources, we are currently waiting for funds. If we do not get the grant, we will try to make up for it with will and determination from the people that have pledged to help us - this is where citizen networks are useful. Second, we will probably face the slow and most times inefficient bureaucratic town hall system and the possible apathy or resistance of the representatives with the political power to start the project. All in all, we are confident that if we build a group of active people who believe that this idea is worth struggling for, I do think we will overcome these obstacles, should they arise.’’

Future Spotters Workshop will be a good place for people and projects like this to mobilize resources and gather the community around issues that really matter. Join us and register for 9-10 July here.

Hello @Predoiu_Alexandru, and welcome to EdgeRyders, I was looking forward to your story and would enjoy learning more, particularly how we (around 60 people and growing) can help you at this point? I see no documents or call for help on this on your website…but feel free to give us a shout.

I am considering applying for the activism camp this end of July, sounds like an interesting place to be right now. Anyone else?

Oh, and of course, hope you register for the workshop we’re holding in July 9-10.

Hi Noemi and all you EdgeRyder rebels out there,

I’m glad you found the project interesting and we hope other people will find it as well. Regarding the state of the project, we are currently on a strategic stand by and that is why there are no information released on the site of the organization. As I have stated in the interview the campaign is programed to start in October 2015, but we have decided, along with our partners, that we should launch a teasing campaign (mostly social media and some street stencils) at least for the time being. We will surely welcome any help and once we start the activities programed I will keep people here informed.

Also, I would love to meet you all in person, or at least the ones that will make it to the workshops and you can definitely count on my presence there. As for the activist camp, maybe I can share some more information at the workshop and see if I can’t convince some of you to join us.

Alex, can you tell me why and where the idea of water as commodity pains you? I mean, beyond the general ideal of social justice which almost anybody would agree on, there’s something that makes people like you different in that they are ready to take the streets and lead. Maybe the urgency that unless we get it fixed, nobody will? Any personal thoughts would make us better understand.

With your permission, I would like to feature your story, and others here in Futurespotters in a presentation advocating for activists and change makers in the city, next Tuesday (event is also listed here on Edgeryders). Any extra material would help.

As for the workshop, looking forward to meet you in person. Don’t forget to register officially (press Attend) so we have an idea of the exact number of people. The room will hold no more than 30.

Sorry for the late response, but I’m not quite familiar with the platform yet and I did not see you request. Let’s start with the request. Of course it’s ok to use any kind of info about the project, in fact I was extremely pleased when Ana told me that you presented the project at the Global Shapers event and I heard you impressed everyone with your presentation. Well done! And sorry again for not responding faster.

As for the motivation behind the project, sure there is the ideal of social justice and free access to water, but there is also my personal nature involved. I find that water is an important resource that we as a community take for granted and I compare this to other communities around the world who struggle for this resource. Then you find out through you day to day experiences that there are individuals around you who struggle for this basic resource. And that is when things change, it becomes personal for me, it becomes real, not just some media reports or some clicks on you facebook page. I guess it’s a mix of my own understanding of life, of our society and the way it works, a strong sense of compassion and the will to change things. That is why I focus allot on activating people and empowering them to struggle for the cause they most believe in. It’s an important topic and which we will have time to talk about face to face.

Hi @Predoiu_Alexandru, just to share this initiative in Detroit where the situation seems even more critical: http://detroitwaterbrigade.org/

Other than advocacy, they do stockpiling of bottles and also collecting rainwater to distribute it to people, and they do this via a huge network of volunteers.

Well I heard that Detroit as a city was going through rough times, but I did not imagine that it could get like this. From what they are saying it seems to be a nightmare scenario. This piece can really help us in the campaign.