Public places have to be accessible to all regardless their mobility capacity. The City Administration regulated the matter for new buildings as well as existing ones. The latter faced a variety of unforeseen problems that resulted into a 10% compliance rate in 15 months since the law passed. In the common understanding, this means a public effort not hitting the target, a cracked relationship between the City Administration and private businesses and ultimately disadvantaged people still vulnerable.

The story begins in 2015 with the City of Milan to pass the Building Regulation article 77 that required all bars, shops, restaurants and craft activities bordering the road, to provide easy access to people with limited mobility or disabilities (the National Institute of Statistic in 2007 assessed 13.189 people with mobility disabilities in Milan). This normative action was the instrument that City of Milan deployed to overcome architectural barriers and provide universal free access to public places by 2017. 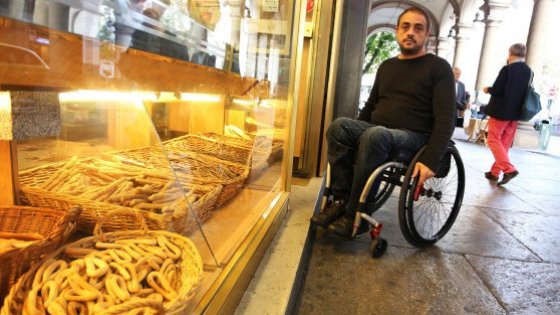 In November 2016, 12 month after the law passed the City of Milan assessed only 2.000 businesses compliant over 18.000. An article on la Repubblica, the second most read Italian newspaper, by the 5 January 2017, published these data and opened a public discussion on the subject.

Lisa Noja (delegate of the Major for accessibility policies) said: We have to make sure that very quickly all businesses comply. This year we want to get to the full application of a rule of civilization and to do that you cannot only use repressive strategies.

It was a beginning of a twist in the Municipal strategy and the start of a speculation about the most effective way to enforce a regulation. The new thinking included working with trade associations, like Confcommercio, as well as promoting campaigns to engage business holders.

Cristina Tajani (City Councillor for labour policies, businesses, trade and human resources) said: places that show attention to the disabled are also easily accessible to children, parents with strollers and the elderly. This does not mean that they will not be submitted to controls, but we want help the business understand that the adjustment should not only be seen as an obligation. It is also a business opportunity.

This is when OpenCare approach came handy. Local staff including WeMake was involved and started talking to as many people as possible, to understand what was not working and tentatively get it streight.

Listening it was vital to start from the pieces of the City Administration that were involved from the beginning like the Major Cabinet, the Urbanistic Department, the Public Soil Occupation Office and lately Urban Economy and Work department. We have understood that the building legislation was conceived in a department and the implementing regulation was written in a different one (and of course published through another one). That gave a lot of room to officers for interpretations and tightening the instructions for businesses to prevent opportunistic behaviors.

Including as the collaboration with the trade association got closed we’ve understood more of the problems that businesses are facing to comply with the regulation, such as: high costs, complex red tape, lack of understanding of the most suitable solution and existing solutions too standardized. Since red tape is partially due to complex implementing regulations and the unclear communication follows, we started facilitating a mutual dialogue between pieces of public administration, businesses and associations. Regarding costs and production related problems, we can take it into the arena of manufacturing 4.0 by including also designers, makers, social innovators, businesses and utilizers.

Going where innovation beats we have started organizing an experimentation called Open Rampe (Rampe means Ramps/Slides) in a limited area of the city that has everything it takes. The Quartiere Isola in fact has a functioning District for Urban Commerce, a civic center devoted to urban regeneration, art and crafts workshops (ADA stecca), active businesses and a long tradition of civic participation. Our idea is to engage business individually and through a public event by 11th April. Involving them into co-design sessions pivoting around their necessities may generate unexpected outcomes.

Dealing with collective intelligence is what we have just started doing by sharing this story here. Any input from the community could be brought into our experimentation and add value to it. It would be interesting to study this collaboration as it happens and share it.

This is where we stand now and the next steps are:

Co-designing / mobilizing resources of course we will not predefine outputs, but rather keep the sessions open to any outcomes.

Prototyping policies by monitoring and evaluating this experimentation.

We are aware that talking about “enforcing” a policy collaboratively may sounds an oxymoron. Since article 77 of the building regulation fits in the EU and the National legal frameworks, it is certainly a top down process. Nevertheless, the Open care approach might help policy makers, (non)compliant businesses, users and citizens to achieve simpler, cheaper and faster solutions.

It would be interesting to know who else has been involved in a similar process and managed it collaboratively. Or not.

You might want to check out the approach of Living Streets (in Ghent, Belgium) - they rethought mobility (car free areas in the city) through a multiyear project . What I learned from them is that it takes sustained effort and some competent leadership that understands both civil service, how policies are made and incentives of the community. In that setup, the convener was not the city itself, but an independent organisation. @Living_Streets can correct me if I’m wrong.

Speaking of incentives, I heard good things about the CarrotMob approach Generically speaking, the logic behind it is pretty cool: businesses who agree to make changes in how they work get a boost in consumer support. I’m sure Milano must have similar groups of community organisers that can (again) be credible interfaces - so “mobs” actually show up and make a difference in the incentive structure.

Are you directly involved in this collaborative law enforcement

Consumers - a driver for change

Thanx @Noemi, we have already got through @Living_street since it was instigated by a Municipality, but we had missed @CarrotMob. We find it quite inspirational since it is purely based on positive instences. In fact in our pilot phase starting 14th april we’ve included (you’ve got me… I am directly involved) many different stakeholders including active citizens. Even if we haven’t thought of them as consumers, therefore, empowered with “incentives”.

You’re right, in the CarrotMob people, as in the money spenders, are supporters, because they do it for the cause more than financial consumption. NB they are different than the civic and environmental activists and may not be prone to acting by themselves or coming to your meetings. But they are a force in that they can be activated in well designed campaigns. It’s like awareness raising, but with actions as outputs (in many cases it means buying from those businesses to reward their move towards greater sustainability).

“Not just an obligation, but an opportunity”

This sentence brings back memories, @Matteo ! Back in 1980s, I was active in the environmentalist movement, and we used to say exactly the same. Waste water filters, air pollution scrubbers… guys, these are opportunities!

It was not true. Not really. A top brand, or a very early mover, could gain marketing advantages by putting in place serious cleanup efforts. But for most small manufacturers in my native Emilia, these were just costs. The benefits went, by definition, to the whole planet.

However, here’s what happened over the decades: businesses started to realise they had done (albeit kicking and screaming) the decent thing. The region had become more livable. As a territory (and not so much as single businesses) they had indeed gathered some competitiveness.

In your case, I think, “it’s an opportunity” is a little more true. Your barber salon or gorcery store has a ramp. The parent with the stroller, the person in the wheelchair can get in easily. They get a good experience. They are more likely to come back to you. But even here, I suspect that the “area” approach is going to be stronger: the message that registers is not “you, personally, can gain a business advantage by servicing people with reduced mobility”, but “here in Milano we make everyone feel welcome”. Not so much the extra profit, but the civic pride. Not the homo oeconomicus, but the “we”.

How is it going yet?

I would imagine (given enough info flow to the potential users) the first couple of shops to do it would get the largest share of extra customers. Those could be specialised shops, or shops with special locations (close to housing units for mobility challenged people - if Milano does things like that).

The tricky bit is making customers and shops aware of each other - but I would expect this to be possible through special interest channels (self help groups, care community, etc.).

Thanx @Alberto and @Noemi, your posts combined make sense of what is happening here at l’Isola District.

Last Wednesday we had a Kick off meeting to share the idea behind Open rampette to a crowd of local businesses, people with limited mobility, makers, associations, activists together with City of Milan civil servants as well as civil servants coming from neighboring cities.

Putting together these people, with a purpose, in the iconic La Stecca 3.0 community center created a favorable atmosphere, as such. The way the meeting was managed made also a difference. In fact City of Milan started “admitting” that the law (see above) was created without enough stakeholders’ engagements and it resulted in limited compliances. The meeting was the occasion to amend the situation by experimenting a talk at a different level based more on moral suasion than power games.

When @Rossana introduced the Open care approach and @Costantino talked about the co-design method, people were interested as well as suddenly engaged. It seems it worked. Since we announced we’d organize a couple of co-design sessions, we’ll see how many people will actively engage.

In her introductory speech, the City councilor Cristina Tajani said that helping enforcing this law isn’t just fair and mandatory, but it may also turn economically profitable for local businesses. Implying that more accessible businesses might have more clients among disabled and caregivers, but also among people that favors living in an equal opportunity neighborhood. This is the point to me. I have the feeling that this initiative is going to be successful here (a track of what’s going on will be provided as it happens) because of the nature of this area.

This place, even if it’s recently gentrified, succeeded in keeping its original community spirit. There are plenty of small independent shops, recreational spaces, associations and spontaneous groups. People who cares. In other words it doesn’t take a single specific reason to wish shops and restaurants to be accessible for all. People, at times, might just follow their sense of community and contribute.

Admission is sometimes the hardest submission

I read that somewhere, and interesting how it holds true in this case.

I said it elsewhere, is there a way to think about recruiting from the very community someone whom the city can trust to run co-design sessions? or experiment: some ran by people already on board, some ran by people brought in aka citizen experts…

Thank you for staying in the loop @Matteo - it helps knowledge buildign a lot. Also, when I saw @zoescope s tweet about a feature in Corriere della sera I knew what it was

There will likely be a mobility focused co-design challenge

here soon. Just wanted to let you know - there seems to be a lot of overlap. So far it is only in brainstorming stage. Did you somehow document some of the outcomes from you workshop online? And do you know of good resources to get everyone on the same page for such an event?