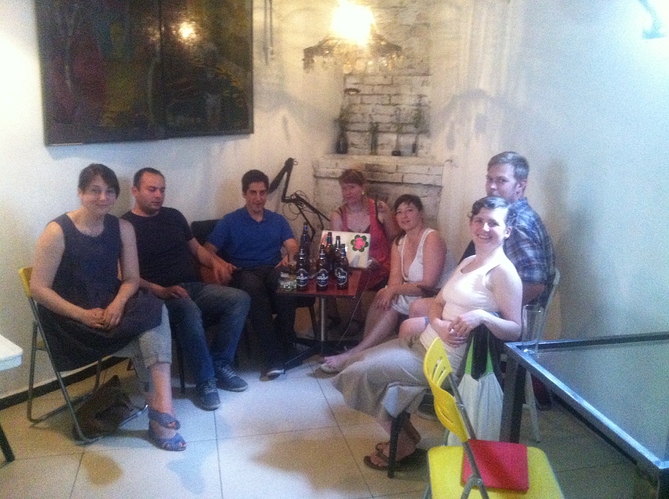 IMG_7251.JPG2592×1936 1.75 MB
My apologies for the delayed summary of bi-weekly meet-up nr. 3! Again lots of issues were discussed, but the main theme of this gathering was Spot the Future’s International event  on June 24th-26th. We were very happy to meet Spot the Future’s ethnographer Inga, to welcome to out midst Lucia, who joined the platform just 4 days ago! Also happy to see in person again: @Boris, @Elene Margvelashvili, Nina, George and Andy.

The first topic which came up was the Twitterstorm, as Lucia had found us through that. After she was in Kyrgyzstan for several months, she decided to move to Georgia a week ago and found us through twitter as a result of the storm. Right now she is looking at all kinds of opportunities in Georgia.

After introducing ourselves we started discussing the event:

Finding the right place for an event such as Spot the Future is more difficult than one might initially realize. It should have room for 40-50 people, wifi, a projector, white boards, flipcharts, etc. However, the places which immediately come to mind are fancy-schmancy hotels, and that’s not really what we’re looking for. Unfortunately, Tbilisi’s one and only squadded place of ACCT was ‘privatized’ by a nomad and his camel and he is refusing to let ACCT back in. Other community places, such as the Vake Park protest by Guerilla Gardening, are out in the open.

Places that were mentioned were: Free University (but it is really far out in the suburbs), The University of Georgia, Georgia’s Expo (but the pavillons might be too big), Europe House (though they were not good in comming back to Edgeryders regarding the previous workshop), Caucasian House and the Sheraton (yes, a fancy-schmancy hotel, but according to Inga they have really laid-back cool conference halls, worth checking out).

Update: Uli mentioned on the task we should also check out the Center for Contemporary Art and GeoAir. During yesterday’s project team call, Khatuna proposed the Goethe Institute. Khatuna and I will sit down for a coffee this week and discus the options, But so far, the Goethe Institute seems like the most viable option: it is very central, it has a beautiful venue, a great garden and a place where we can get food/probably make food ourselves. We will keep you updated.

Social activities, or in other words: what will we do in the hours not spend on the workshop and eating! Basically what is needed for this task: Ideas! What could we do? The first idea we came up with, was to go and meet the activists of Guerilla gardening in vake Park and have some social activities with them: play frisbee, make music, or anything they propose. Perhaps Nickda (Nika Davitashvili) can organize something for us? The second idea which was proposed by George, was to have a picnic at Turtle Lake, or anywhere else. We bring some food and enjoy the beautiful nature somewhere around Tbilisi. It’s easy to organize, and we’ll immediately have our evening food planned out as well. We can do several different social games, bring music instruments, make a campfire, etc. Nina proposed to do something volunteer-ish as social activity. This idea was welcomed by everybody! Maybe we can do a clean-up somewhere in Tbilisi, or perhaps Iare pekhit could organize a pedestrian action? Or perhaps Cyclehack Tbilisi would be interested in organizing something? Or we could even perhaps map some places in Tbilisi! The possibilities are endless!

Update: Khatuna and me will sit down for a coffee and discus what is feasibly and come back to you later on this. in the meantime, please propose your ideas: you run the show!

Ideally, we would love to make some food together. But unfortunately, Tbilisi does not have appropriate places for this, especially not for around 40 people. And while I was getting nervous about this, Inga said: “why don’t we do it here in Bauhaus?” Genius! So we asked the owners of Bauhaus and they were very happy to host us! They said they could set up electric stoves in the bar and we could organize an evening there. The guys are great! Another option is the picnic as proposed in social activities. For both evenings, we do nee to see who would be willing to do what: where do we get the food? Who brings what, basically.

Update: if we organize the event in the Goethe Institute, we could also - most likely - cook one evening there.

We want the participants of the Spot the Future event to take control, we all build this event together, it’s a #nospectator event! So, who will curate a track or host a session? Boris, from Wehelp.ge said he would love to host a session and that he would propose something once his finals are over (next week). Anyone else who is interested in hosting a session or curating a track? Please let us know!

Funnily enough, our new member Lucia mentioned that she is trying to set up a crowd-funding platform for an animal shelter in Kyrgyzstan where she volunteered. And obviously, Boris from Wehelp was quick to jump in to offer her some support.

As the event is coming soon, we will have another bi-weekly meeting not in two weeks, but next week. Keep an eye on the events and join us to see how you could participate!

A job well done! just to say that regarding social activities - they don’t have to take all day or be too sophisticated, or take too much of someone’s time to organise. Don’t sweat it, there’s already plenty of stuff here and it all sounds crazy. good crazy

And to everyone in Georgia, if you plan to attend  24-26 don’t forget to register by leaving a comment on the event page, that way we know you are coming, count you in for meals, and others can connect with you before we actually meet!

This is coming up really nicely, @Inge, thanks!

I am a bit surprised to find no mention of our plans to get a common Horizon 2020 project off the ground. Do we still want to try to make it happen or have we moved on? I made a one-pager over two weeks ago; the plan (see this comment and the following ones) was that then you guys, probably led by @ericnbarrett and others, would change the things you wanted improved and then ask for an appointment at the EU delegation to Georgia.

If we do want to move ahead, it would make sense to do the following:

But let me say this again: Edgeryders stands ready to help, but this can only work if you take ownership of the project. We can’t lead a project in Georgia from Brussels, and even if we could there would be little point doing it. If your schedules are too busy, this is perfectly fine; we’ll just move on and do something else instead.

You are absolutely right!

yes alberto, we didnt discus is because @ericnbarrett unfortunately couldnt make it. We’ll def discus it this Friday, in the meantime, could you have a look at the paper Eric? I can set up an appointment with the EC in Georgia once we agree on the paper.