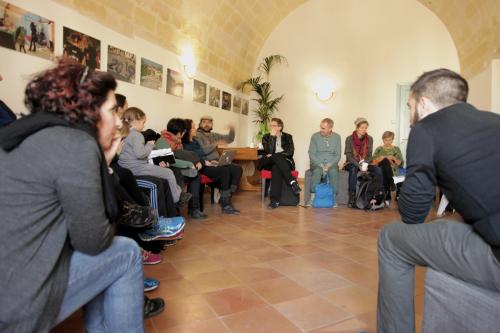 Following our session on transparency at #Lote4 with @mariabyck, @danohu and @jamesl, as well as Patrick’s post on community transitions, this post is about Lote4 organisation, with focus on the collective effort and various levels of engagement. Open to constructive comments, and big big thanks to everyone.

The fourth edition of Living on the Edge (Lote4) took place on 24-26 October, 2014 at the unMonastery Matera and was preceded by a two day harmonious hackathon. As with all Lote events, this one, too, was entirely organised through volunteering efforts and peer to peer collaboration, under a “no spectators” slogan. A couple of Edgeryders began to think about an overarching theme (stewardship) in June and initiated fundraising immediately, while the practical organisation of the event happened during July-October, involving many community members in a shared effort led by Edgeryders LBG. The latter is the social enterprise committed to supporting the community in organising yearly events where members are able to meet face to face, enjoy time together and dream up future collaborations.

Several accounts make us be proud in thinking that this fourth Lote has been our most successful so far, be it because of the unMonastery magic, the involvement of Materani and projects from Basilicata, or because the radical diversity enabled valuable knowledge exchange.

2. How many people attended?

Almost everyone contributed by facilitating sessions (the agenda was driven entirely by the participants’ topics of interest), conference ticketing, communication and social media, building collaboration with Basilicata projects, collecting case studies of stewardship across the world, unMonastery venue preparations, video and photos, collective cooking and other logistics. If some hadn’t gotten involved prior to Lote, they were surely onboarded on the spot (proof is in the visual documentation below!).

3. How could anyone get involved?

The conversation of any Living on the Edge event takes place all year long, so anyone who wants to drive it and is willing to take responsibility is welcome to do so. We have set up a number of web coordination tools to make collaboration easier and make sure new people find their way in. Here were some major milestones:

Participation was not free, yet it was not charged in money, it was charged in collaboration. Almost everyone who attended Living on the Edge had earned their ticket, by contributing in advance or committing to contribute at the event or in the follow up (learn more). Few inevitable exceptions were natural (last minute registrations or show ups) because LOTE is essentially an open event and the idea of tickets, far from restricting access, was meant to encourage and even formalize collaboration.

The Lote4 ticket value was estimated at two days of work and was to be “purchased” on MakerFox, via a simplified network barter algorithm. Anyone who wanted to participate would register on Makerfox and order the ticket, while taking on tasks on edgeryders.eu. Once enough tasks were completed, their Makerfox user account would be loaded with the corresponding amounts and a deal would be made. Tickets would then be sent via email.

The below is a progress bar from MakerFox showing general tickets updates. Once a user reached 100%, even if they did work afterwards, we found it was too time consuming for a small team to keep track of literally every task performed extra. As we got closer to the event, the bureaucracy of having people sign up on MakerFox and report the work on Edgeryders made it too hard to move fast, and so we sent tickets directly to those contributing without waiting for the official barter deal to be concluded. Hence some Lote participants are missing from the MakerFox database.

A small number of community members and/or company directors committed early on to make Lote4 worthwhile, meaningful and fun. Among the core team, @nadia did fundraising, @ben and @alberto took on the program curation, @noemi did communication and community management, @arthurd managed finances and had a final word on budget decisions, @matthias was the tech lead. @natalia_skoczylas was the conference floor manager in Matera.

Other community members became heavily involved in the process and their work amounts to much more than the value of a conference ticket: @mariabyck, @lauren, @hazem, @nicobis, @anon, the case study adventurers in Europe and Basilicata, mainly: without that significant chunk of work at the core of the content production, we wouldn’t have made it; those who joined community calls every Thursday and consistently helped with write ups, @katalin and @bembo_davies who took on the stewardship of unMonastery conference venue, and more that I’m surely missing.

Living on the Edge is a community event built with much more love than resources. No one was paid for organising Lote4 per se. The exception is Natalia, whose work was already covered by a European grant. She showed a lot of initiative reaching out to us saying “can I intern with you guys?” Without her persistence and liaising work in Matera weeks ahead of the event, a lot of great ideas wouldn’t have happened, so resourcing this coordination role in a future event should not be underestimated. The Edgeryders company which was fundraising managed to allocate financial resources from multiple projects to support a limited number of participants’ travels and some engagement and dissemination work whose results would be deliverables in those specific projects (see Budget below). Our hope is that in the future, more compensation will be available and directed to Edgeryders members involved in organising community events.

Covering the overhead: Edgeryders LBG will make a finance assessment and see how much money was raised over the year - the so called “profit” which is to be reinvested in the community and support base. A percentage will be allocated to community management, web development and business opportunity creation services, or any other overhead work to keep the infrastructure going, work that isn’t normally covered by formal contracts. The company being only a year old, none of that work has been compensated, as of December 2014. Edgeryders LBG does not have any employees either.

Living on the Edge was supported mainly via three sources:

Here are the final expenses:

The main decisions were related to offering travel grants, spots for sleeping in the unMonastery, a couple of paid positions, and food budget.

The decision on whom to offer travel grants was made by the core team collectively and on loose agreements: first come, first served basis; that the person took a team coordination role or already earned a ticket, that the person has been involved and not compensated for work in the past and they are trusted to continue to contribute.

Decided entirely by the group of unMonasterians and reporting back to the team during the community calls.

All decisions by which Edgeryders LBG is contracting an individual service are made by the project manager. Note that most paid positions go to trusted community members, and especially those that had previously done unpaid work.

Food was organised at community initiative and in line with “who does the work calls the shots”. Katalin offered to coordinate, so it was. There was an initial budget released openly based on which purchases were made. No micromanaging as far as the Edgeryders company or clients were concerned.

10. What have we learned about organising LOTE?

We love our annual community get togethers. They are an important opportunity where old and new friends think, work and celebrate together. We learned we need to start organising Lote a year before to give ourselves enough time to plan everything, involve even more people and avoid burning out in 3 months time. Since this year almost all fundraising efforts were shouldered by one person alone, we need more Edgeryders involved in this particular activity, the sooner the better.

Can we improve the crowdsourcing of efforts to organise community events with relatively low budget? An idea suggested by @matthias is to create the next collaborative events at cost. Cost includes not just monetary expenses, but all the work: all the things people would not do if not compensated. We’d have a budget for “unavoidable” legal tender monetary expenses, and another one for in-kind contributions (labor needed in hours), which means we would not even try to put a price tag on the immaterial value generated, but only on the material value needed to make the immaterial value creation happen. MakerFox would be the platform for this, enabling donations in barter value for the collaborative event.

Ideas have popped up on making LOTE more harmonious hackathon focused, to doing a walking unconference format (we organise a long trek and people do lectures/host conversations while walking or during breaks).

Should we keep the same format or try something new? How do we raise the funds to cover the expenses involved and build a strong core team? If you have ideas or would like to host the next Edgeryders event, you can make a proposal and get the conversation going by creating a post in this group (make sure you are logged in).

First of all, a core team of documenters were dedicated to share the experience with those not in attendance. Our commitment generated comprehensive and fairly accurate documentation, in rough shared notes on hackpack and also in full fledged reflections.

A month after the event we have pulled the different threads together and have come up with a number of ways forward. We are dreaming of new unMonasteries, more Harmonious Hackathons and even a home base for the Edgeryders community. Here is the blast and ways you can get involved early on!

Have you been involved in organising Lote4? What have you personally learned?

2 Likes
Projects Recycle Bin: ready to remix & resubmit
Community call Wednesday 11 am: 8 weeks to LOTE5!
Deliverables: Narrative Reports (Interim and Final)
The Stewardship: what have we learned about engaging the networks?
A list of recent acts of resources sharing and transparency from Edgeryders LBG to the community
Where did we fail in organizing this open event? Help build a short Book of LOTE5 (un)Fails!
Concept Note: The future of care in the hands of hackers